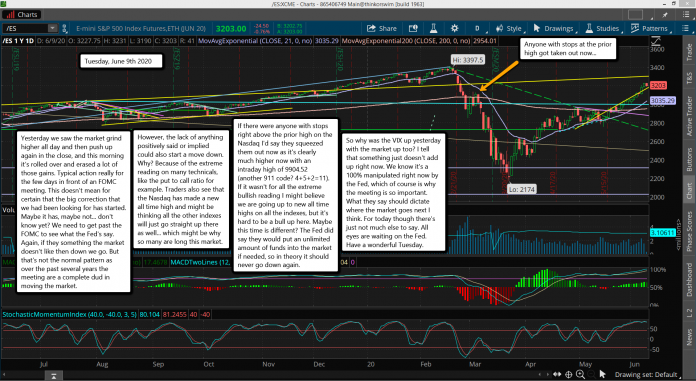 Yesterday we saw the market grind higher all day and then push up again in the close, and this morning it's rolled over and erased a lot of those gains. Typical action really for the few days in front of an FOMC meeting. This doesn't mean for certain that the big correction that we had been looking for has started. Maybe it has, maybe not... don't know yet? We need to get past the FOMC to see what the Fed's say. Again, if they something the market doesn't like then down we go. But that's not the normal pattern as over the past several years the meeting are a complete dud in moving the market.

However, the lack of anything positively said or implied could also start a move down. Why? Because of the extreme reading on many technicals, like the put to call ratio for example. Traders also see that the Nasdaq has made a new all time high and might be thinking all the other indexes will just go straight up there as well... which might be why so many are long this market.

If there were anyone with stops right above the prior high on the Nasdaq I'd say they squeezed them out now as it's clearly much higher now with an intraday high of 9904.52 (another 911 code? 4+5+2=11). If it wasn't for all the extreme bullish reading I might believe we are going up to new all time highs on all the indexes, but it's hard to be a bull up here. Maybe this time is different? The Fed did say they would put an unlimited amount of funds into the market if needed, so in theory it should never go down again.

So why was the VIX up yesterday with the market up too? I tell that something just doesn't add up right now. We know it's a 100% manipulated right now by the Fed, which of course is why the meeting is so important. What they say should dictate where the market goes next I think. For today though there's just not much else to say. All eyes are waiting on the Fed. Have a wonderful Tuesday.