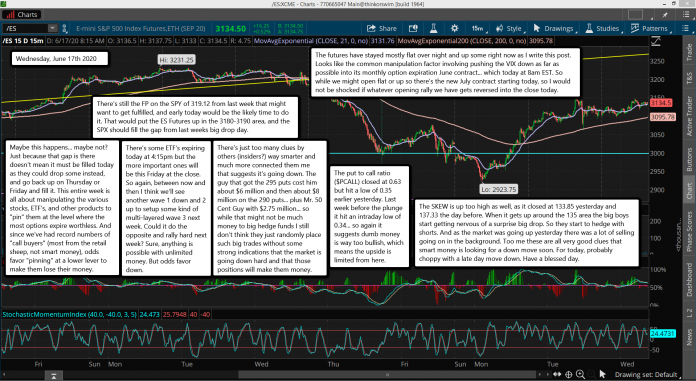 The futures have stayed mostly flat over night and up some right now as I write this post. Looks like the common manipulation factor involving pushing the VIX down as far as possible into its monthly option expiration June contract... which today at 8am EST. So while we might open flat or up so there's the new July contract starting today, so I would not be shocked if whatever opening rally we have gets reversed into the close today.

There's still the FP on the SPY of 319.12 from last week that might want to get fulfilled, and early today would be the likely time to do it. That would put the ES Futures up in the 3180-3190 area, and the SPX should fill the gap from last weeks big drop day.

Maybe this happens... maybe not? Just because that gap is there doesn't mean it must be filled today as they could drop some instead, and go back up on Thursday or Friday and fill it. This entire week is all about manipulating the various stocks, ETF's, and other products to "pin" them at the level where the most options expire worthless. And since we've had record numbers of "call buyers" (most from the retail sheep, not smart money), odds favor "pinning" at a lower lever to make them lose their money.

There's some ETF's expiring today at 4:15pm but the more important ones will be this Friday at the close. So again, between now and then I think we'll see another wave 1 down and 2 up to setup some kind of multi-layered wave 3 next week. Could it do the opposite and rally hard next week? Sure, anything is possible with unlimited money. But odds favor down.

There's just too many clues by others (insiders?) way smarter and much more connected them me that suggests it's going down. The guy that got the 295 puts cost him about $6 million and then about $8 million on the 290 puts... plus Mr. 50 Cent Guy with $2.75 million... so while that might not be much money to big hedge funds I still don't think they just randomly place such big trades without some strong indications that the market is going down hard and that those positions will make them money.

The put to call ratio ($PCALL) closed at 0.63 but hit a low of 0.35 earlier yesterday. Last week before the plunge it hit an intraday low of 0.34... so again it suggests dumb money is way too bullish, which means the upside is limited from here.

The SKEW is up too high as well, as it closed at 133.85 yesterday and 137.33 the day before. When it gets up around the 135 area the big boys start getting nervous of a surprise big drop. So they start to hedge with shorts. And as the market was going up yesterday there was a lot of selling going on in the background. Too me these are all very good clues that smart money is looking for a down move soon. For today, probably choppy with a late day move down. Have a blessed day.