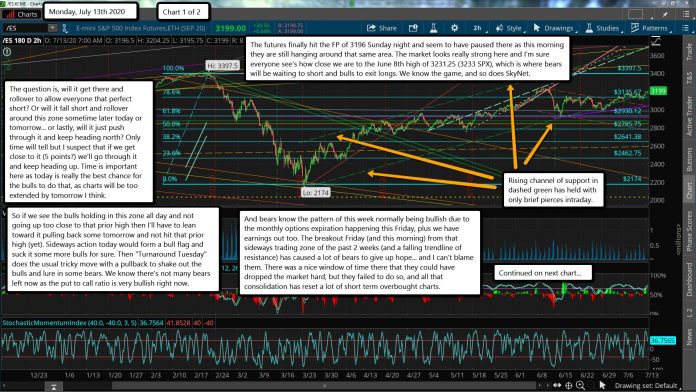 The futures finally hit the FP of 3196 Sunday night and seem to have paused there as this morning they are still hanging around that same area. The market looks really strong here and I'm sure everyone see's how close we are to the June 8th high of 3231.25 (3233 SPX), which is where bears will be waiting to short and bulls to exit longs. We know the game, and so does SkyNet.

The question is, will it get there and rollover to allow everyone that perfect short? Or will it fall short and rollover around this zone sometime later today or tomorrow... or lastly, will it just push through it and keep heading north? Only time will tell but I suspect that if we get close to it (5 points?) we'll go through it and keep heading up. Time is important here as today is really the best chance for the bulls to do that, as charts will be too extended by tomorrow I think.

So if we see the bulls holding in this zone all day and not going up too close to that prior high then I'll have to lean toward it pulling back some tomorrow and not hit that prior high (yet). Sideways action today would form a bull flag and suck it some more bulls for sure. Then "Turnaround Tuesday" does the usual tricky move with a pullback to shake out the bulls and lure in some bears. We know there's not many bears left now as the put to call ratio is very bullish right now.

And bears know the pattern of this week normally being bullish due to the monthly options expiration happening this Friday, plus we have earnings out too. The breakout Friday (and this morning) from that sideways trading zone of the past 2 weeks (and a falling trendline of resistance) has caused a lot of bears to give up hope... and I can't blame them. There was a nice window of time there that they could have dropped the market hard, but they failed to do so, and all that consolidation has reset a lot of short term overbought charts. 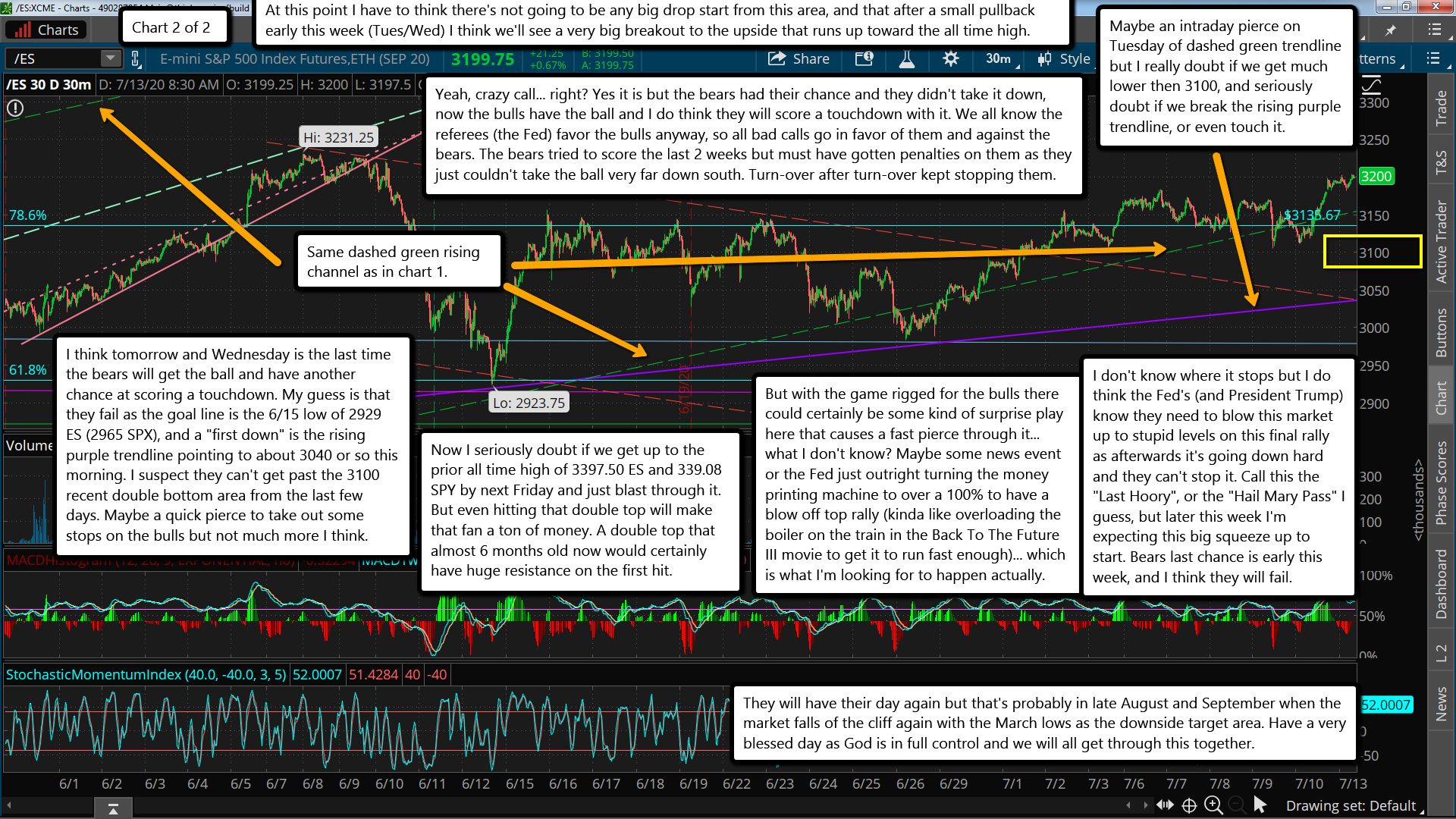 At this point I have to think there's not going to be any big drop start from this area, and that after a small pullback early this week (Tues/Wed) I think we'll see a very big breakout to the upside that runs up toward the all time high.

Yeah, crazy call... right? Yes it is but the bears had their chance and they didn't take it down, now the bulls have the ball and I do think they will score a touchdown with it. We all know the referees (the Fed) favor the bulls anyway, so all bad calls go in favor of them and against the bears. The bears tried to score the last 2 weeks but must have gotten penalties on them as they just couldn't take the ball very far down south. Turn-over after turn-over kept stopping them.

I think tomorrow and Wednesday is the last time the bears will get the ball and have another chance at scoring a touchdown. My guess is that they fail as the goal line is the 6/15 low of 2929 ES (2965 SPX), and a "first down" is the rising purple trendline pointing to about 3040 or so this morning. I suspect they can't get past the 3100 recent double bottom area from the last few days. Maybe a quick pierce to take out some stops on the bulls but not much more I think. On a side-note it seems someone (a bull fan in the audience? LOL) took out a large bet on the bulls scoring huge with this large call option trade. 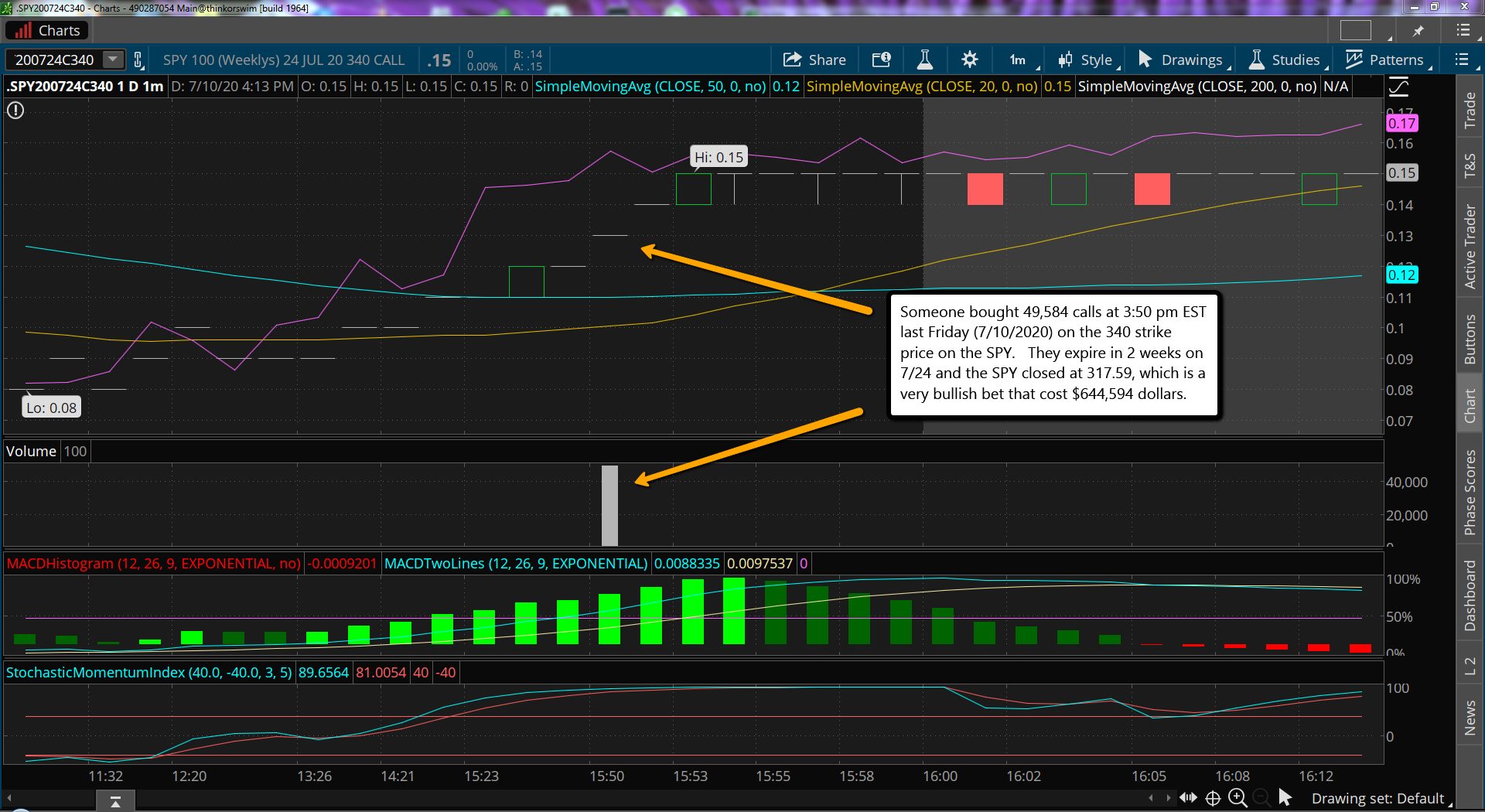 Now I seriously doubt if we get up to the prior all time high of 3397.50 ES and 339.08 SPY by next Friday and just blast through it. But even hitting that double top will make that fan a ton of money. A double top that almost 6 months old now would certainly have huge resistance on the first hit.

But with the game rigged for the bulls there could certainly be some kind of surprise play here that causes a fast pierce through it... what I don't know? Maybe some news event or the Fed just outright turning the money printing machine to over a 100% to have a blow off top rally (kinda like overloading the boiler on the train in the Back To The Future III movie to get it to run fast enough)... which is what I'm looking for to happen actually.

I don't know where it stops but I do think the Fed's (and President Trump) know they need to blow this market up to stupid levels on this final rally as afterwards it's going down hard and they can't stop it. Call this the "Last Hoory", or the "Hail Mary Pass" I guess, but later this week I'm expecting this big squeeze up to start. Bears last chance is early this week, and I think they will fail.

They will have their day again but that's probably in late August and September when the market falls of the cliff again with the March lows as the downside target area. Have a very blessed day as God is in full control and we will all get through this together.