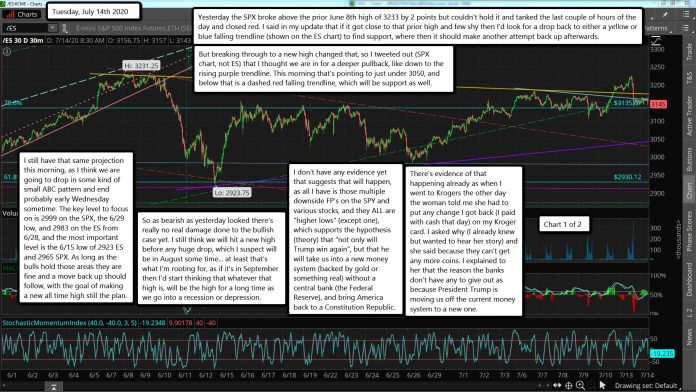 Yesterday the SPX broke above the prior June 8th high of 3233 by 2 points but couldn't hold it and tanked the last couple of hours of the day and closed red. I said in my update that if it got close to that prior high and few shy then I'd look for a drop back to either a yellow or blue falling trendline (shown on the ES chart) to find support, where then it should make another attempt back up afterwards.

But breaking through to a new high changed that, so I tweeted out (SPX chart, not ES) that I thought we are in for a deeper pullback, like down to the rising purple trendline. This morning that's pointing to just under 3050, and below that is a dashed red falling trendline, which will be support as well.

I still have that same projection this morning, as I think we are going to drop in some kind of small ABC pattern and end probably early Wednesday sometime. The key level to focus on is 2999 on the SPX, the 6/29 low, and 2983 on the ES from 6/28, and the most important level is the 6/15 low of 2923 ES and 2965 SPX. As long as the bulls hold those areas they are fine and a move back up should follow, with the goal of making a new all time high still the plan. 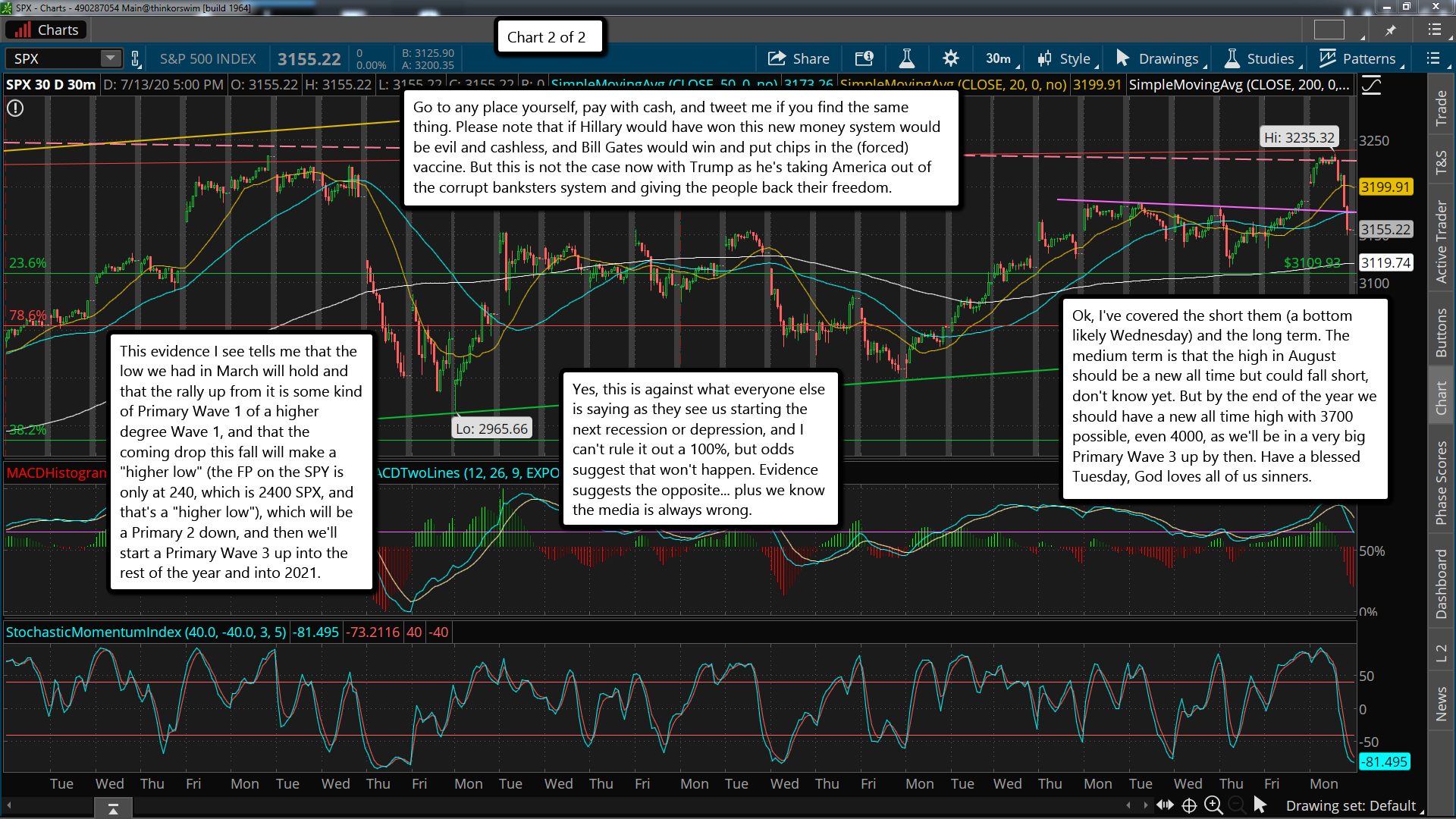 So as bearish as yesterday looked there's really no real damage done to the bullish case yet. I still think we will hit a new high before any huge drop, which I suspect will be in August some time... at least that's what I'm rooting for, as if it's in September then I'd start thinking that whatever that high is, will be the high for a long time as we go into a recession or depression.

I don't have any evidence yet that suggests that will happen, as all I have is those multiple downside FP's on the SPY and various stocks, and they ALL are "higher lows" (except one), which supports the hypothesis (theory) that "not only will Trump win again", but that he will take us into a new money system (backed by gold or something real) without a central bank (the Federal Reserve), and bring America back to a Constitution Republic.

There's evidence of that happening already as when I went to Krogers the other day the woman told me she had to put any change I got back (I paid with cash that day) on my Kroger card. I asked why (I already knew but wanted to hear her story) and she said because they can't get any more coins. I explained to her that the reason the banks don't have any to give out as because President Trump is moving us off the current money system to a new one.

Side Note:  I found this online but I haven't been to Lowe's recently to confirm... 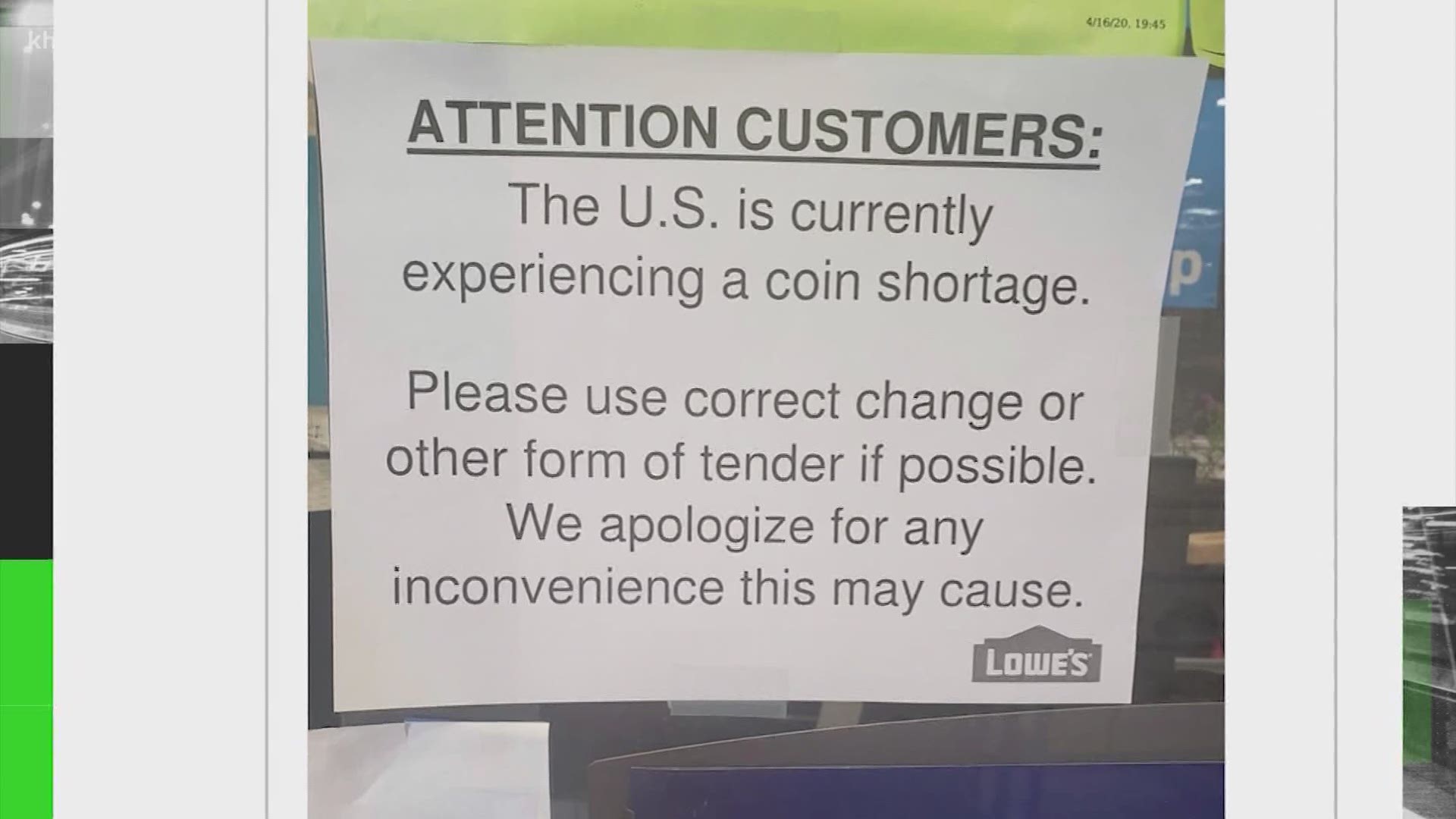 Go to any place yourself, pay with cash, and tweet me if you find the same thing. Please note that if Hillary would have won this new money system would be evil and cashless, and Bill Gates would win and put chips in the (forced) vaccine. But this is not the case now with Trump as he's taking America out of the corrupt banksters system and giving the people back their freedom.

This evidence I see tells me that the low we had in March will hold and that the rally up from it is some kind of Primary Wave 1 of a higher degree Wave 1, and that the coming drop this fall will make a "higher low" (the FP on the SPY is only at 240, which is 2400 SPX, and that's a "higher low"), which will be a Primary 2 down, and then we'll start a Primary Wave 3 up into the rest of the year and into 2021.

Yes, this is against what everyone else is saying as they see us starting the next recession or depression, and I can't rule it out a 100%, but odds suggest that won't happen. Evidence suggests the opposite... plus we know the media is always wrong.

Ok, I've covered the short them (a bottom likely Wednesday) and the long term. The medium term is that the high in August should be a new all time but could fall short, don't know yet. But by the end of the year we should have a new all time high with 3700 possible, even 4000, as we'll be in a very big Primary Wave 3 up by then. Have a blessed Tuesday, God loves all of us sinners.