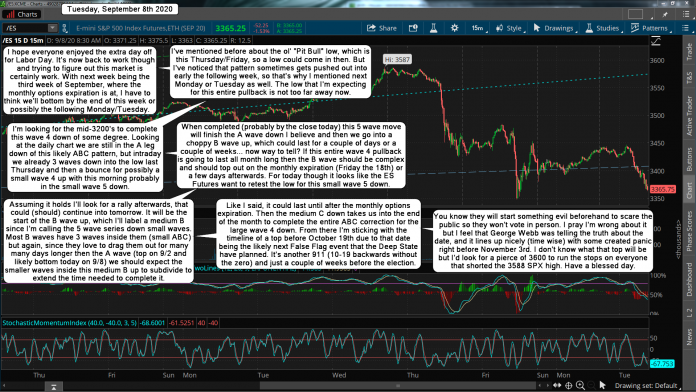 I hope everyone enjoyed the extra day off for Labor Day. It's now back to work though and trying to figure out this market is certainly work. With next week being the third week of September, where the monthly options expiration is at, I have to think we'll bottom by the end of this week or possibly the following Monday/Tuesday.

I've mentioned before about the ol' "Pit Bull" low, which is this Thursday/Friday, so a low could come in then. But I've noticed that pattern sometimes gets pushed out into early the following week, so that's why I mentioned next Monday or Tuesday as well. The low that I'm expecting for this entire pullback is not too far away now.

I'm looking for the mid-3200's to complete this wave 4 down of some degree. Looking at the daily chart we are still in the A leg down of this likely ABC pattern, but intraday we already 3 waves down into the low last Thursday and then a bounce for possibly a small wave 4 up with this morning probably in the small wave 5 down.

When completed (probably by the close today) this 5 wave move will finish the A wave down I believe and then we go into a choppy B wave up, which could last for a couple of days or a couple of weeks... now way to tell? If this entire wave 4 pullback is going to last all month long then the B wave should be complex and should top out on the monthly expiration (Friday the 18th) or a few days afterwards. For today though it looks like the ES Futures want to retest the low for this small wave 5 down.

Assuming it holds I'll look for a rally afterwards, that could (should) continue into tomorrow. It will be the start of the B wave up, which I'll label a medium B since I'm calling the 5 wave series down small waves. Most B waves have 3 waves inside them (small ABC) but again, since they love to drag them out for many many days longer then the A wave (top on 9/2 and likely bottom today on 9/8) we should expect the smaller waves inside this medium B up to subdivide to extend the time needed to complete it.

Like I said, it could last until after the monthly options expiration. Then the medium C down takes us into the end of the month to complete the entire ABC correction for the large wave 4 down. From there I'm sticking with the timeline of a top before October 19th due to that date being the likely next False Flag event that the Deep State have planned. It's another 911 (10-19 backwards without the zero) and just a couple of weeks before the election.

You know they will start something evil beforehand to scare the public so they won't vote in person. I pray I'm wrong about it but I feel that George Webb was telling the truth about the date, and it lines up nicely (time wise) with some created panic right before November 3rd. I don't know what that top will be but I'd look for a pierce of 3600 to run the stops on everyone that shorted the 3588 SPX high. Have a blessed day.