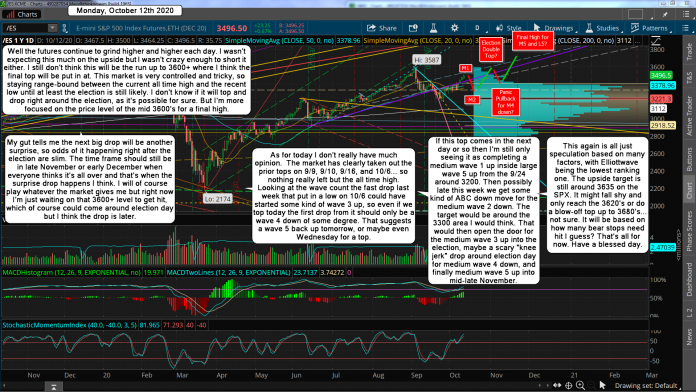 Well the futures continue to grind higher and higher each day. I wasn't expecting this much on the upside but I wasn't crazy enough to short it either. I still don't think this will be the run up to 3600+ where I think the final top will be put in at. This market is very controlled and tricky, so staying range-bound between the current all time high and the recent low until at least the election is still likely. I don't know if it will top and drop right around the election, as it's possible for sure. But I'm more focused on the price level of the mid 3600's for a final high.

My gut tells me the next big drop will be another surprise, so odds of it happening right after the election are slim. The time frame should still be in late November or early December when everyone thinks it's all over and that's when the surprise drop happens I think. I will of course play whatever the market gives me but right now I'm just waiting on that 3600+ level to get hit, which of course could come around election day but I think the drop is later.

As for today I don't really have much opinion.  The market has clearly taken out the prior tops on 9/9, 9/10, 9/16, and 10/6... so nothing really left but the all time high. Looking at the wave count the fast drop last week that put in a low on 10/6 could have started some kind of wave 3 up, so even if we top today the first drop from it should only be a wave 4 down of some degree. That suggests a wave 5 back up tomorrow, or maybe even Wednesday for a top.

If this top comes in the next day or so then I'm still only seeing it as completing a medium wave 1 up inside large wave 5 up from the 9/24 around 3200. Then possibly late this week we get some kind of ABC down move for the medium wave 2 down. The target would be around the 3300 area I would think. That would then open the door for the medium wave 3 up into the election, maybe a scary "knee jerk" drop around election day for medium wave 4 down, and finally medium wave 5 up into mid-late November.

This again is all just speculation based on many factors, with Elliottwave being the lowest ranking one. The upside target is still around 3635 on the SPX. It might fall shy and only reach the 3620's or do a blow-off top up to 3680's... not sure. It will be based on how many bear stops need hit I guess? That's all for now. Have a blessed day.