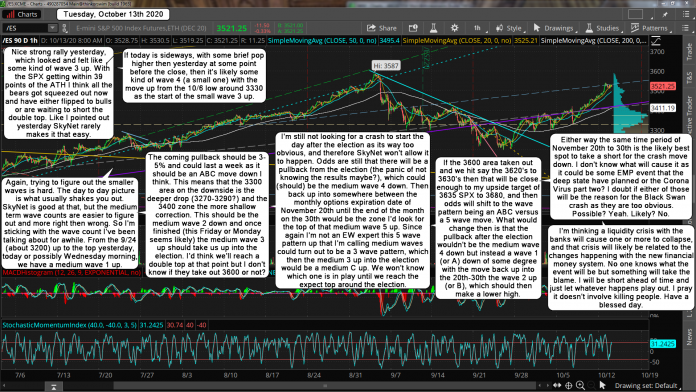 Nice strong rally yesterday, which looked and felt like some kind of wave 3 up. With the SPX getting within 39 points of the ATH I think all the bears got squeezed out now and have either flipped to bulls or are waiting to short the double top. Like I pointed out yesterday SkyNet rarely makes it that easy.

If today is sideways, with some brief pop higher then yesterday at some point before the close, then it's likely some kind of wave 4 (a small one) with the move up from the 10/6 low around 3330 as the start of the small wave 3 up.

Again, trying to figure out the smaller waves is hard. The day to day picture is what usually shakes you out. SkyNet is good at that, but the medium term wave counts are easier to figure out and more right then wrong. So I'm sticking with the wave count I've been talking about for awhile. From the 9/24 (about 3200) up to the top yesterday, today or possibly Wednesday morning, we have a medium wave 1 up.

The coming pullback should be 3-5% and could last a week as it should be an ABC move down I think. This means that the 3300 area on the downside is the deeper drop (3270-3290?) and the 3400 zone the more shallow correction. This should be the medium wave 2 down and once finished (this Friday or Monday seems likely) the medium wave 3 up should take us up into the election. I'd think we'll reach a double top at that point but I don't know if they take out 3600 or not?

I'm still not looking for a crash to start the day after the election as its way too obvious, and therefore SkyNet won't allow it to happen. Odds are still that there will be a pullback from the election (the panic of not knowing the results maybe?), which could (should) be the medium wave 4 down. Then back up into somewhere between the monthly options expiration date of November 20th until the end of the month on the 30th would be the zone I'd look for the top of that medium wave 5 up. Since again I'm not an EW expert this 5 wave pattern up that I'm calling medium waves could turn out to be a 3 wave pattern, which then the medium 3 up into the election would be a medium C up. We won't know which one is in play until we reach the expect top around the election.

If the 3600 area taken out and we hit say the 3620's to 3630's then that will be close enough to my upside target of 3635 SPX to 3680, and then odds will shift to the wave pattern being an ABC versus a 5 wave move. What would change then is that the pullback after the election wouldn't be the medium wave 4 down but instead a wave 1 (or A) down of some degree with the move back up into the 20th-30th the wave 2 up (or B), which should then make a lower high.

Either way the same time period of November 20th to 30th is the likely best spot to take a short for the crash move down. I don't know what will cause it as it could be some EMP event that the deep state have planned or the Corona Virus part two? I doubt if either of those will be the reason for the Black Swan crash as they are too obvious. Possible? Yeah. Likely? No.

I'm thinking a liquidity crisis with the banks will cause one or more to collapse, and that crisis will likely be related to the changes happening with the new financial money system. No one knows what the event will be but something will take the blame. I will be short ahead of time and just let whatever happens play out. I pray it doesn't involve killing people. Have a blessed day.