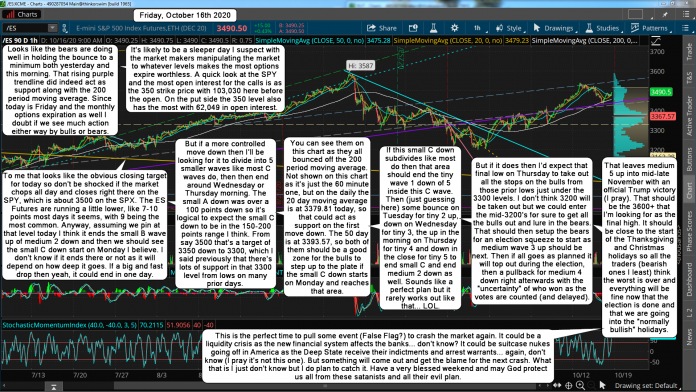 Looks like the bears are doing well in holding the bounce to a minimum both yesterday and this morning. That rising purple trendline did indeed act as support along with the 200 period moving average. Since today is Friday and the monthly options expiration as well I doubt if we see much action either way by bulls or bears.

It's likely to be a sleeper day I suspect with the market makers manipulating the market to whatever levels makes the most options expire worthless. A quick look at the SPY and the most open interest for the calls is as the 350 strike price with 103,030 here before the open. On the put side the 350 level also has the most with 62,049 in open interest.

To me that looks like the obvious closing target for today so don't be shocked if the market chops all day and closes right there on the SPY, which is about 3500 on the SPX. The ES Futures are running a little lower, like 7-10 points most days it seems, with 9 being the most common. Anyway, assuming we pin at that level today I think it ends the small B wave up of medium 2 down and then we should see the small C down start on Monday I believe. I don't know if it ends there or not as it will depend on how deep it goes. If a big and fast drop then yeah, it could end in one day.

But if a more controlled move down then I'll be looking for it to divide into 5 smaller waves like most C waves do, then then end around Wednesday or Thursday morning. The small A down was over a 100 points down so it's logical to expect the small C down to be in the 150-200 points range I think. From say 3500 that's a target of 3350 down to 3300, which I said previously that there's lots of support in that 3300 level from lows on many prior days.

You can see them on this chart as they all bounced off the 200 period moving average. Not shown on this chart as it's just the 60 minute one, but on the daily the 20 day moving average is at 3379.81 today, so that could act as support on the first move down. The 50 day is at 3393.57, so both of them should be a good zone for the bulls to step up to the plate if the small C down starts on Monday and reaches that area.

If this small C down subdivides like most do then that area should end the tiny wave 1 down of 5 inside this C wave. Then (just guessing here) some bounce on Tuesday for tiny 2 up, down on Wednesday for tiny 3, the up in the morning on Thursday for tiny 4 and down in the close for tiny 5 to end small C and end medium 2 down as well. Sounds like a perfect plan but it rarely works out like that... LOL.

But if it does then I'd expect that final low on Thursday to take out all the stops on the bulls from those prior lows just under the 3300 levels. I don't think 3200 will be taken out but we could enter the mid-3200's for sure to get all the bulls out and lure in the bears. That should then setup the bears for an election squeeze to start as medium wave 3 up should be next. Then if all goes as planned it will top out during the election, then a pullback for medium 4 down right afterwards with the "uncertainty" of who won as the votes are counted (and delayed).

That leaves medium 5 up into mid-late November with an official Trump victory (I pray). That should be the 3600+ that I'm looking for as the final high. It should be close to the start of the Thanksgiving and Christmas holidays so all the traders (bearish ones I least) think the worst is over and everything will be fine now that the election is done and that we are going into the "normally bullish" holidays.

This is the perfect time to pull some event (False Flag?) to crash the market again. It could be a liquidity crisis as the new financial system affects the banks... don't know? It could be suitcase nukes going off in America as the Deep State receive their indictments and arrest warrants... again, don't know (I pray it's not this one). But something will come out and get the blame for the next crash. What that is I just don't know but I do plan to catch it. Have a very blessed weekend and may God protect us all from these satanists and all their evil plan.