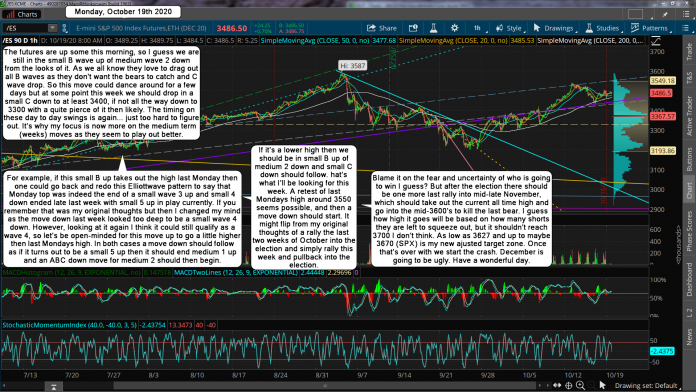 The futures are up some this morning, so I guess we are still in the small B wave up of medium wave 2 down from the looks of it. As we all know they love to drag out all B waves as they don't want the bears to catch and C wave drop. So this move could dance around for a few days but at some point this week we should drop in a small C down to at least 3400, if not all the way down to 3300 with a quite pierce of it then likely. The timing on these day to day swings is again... just too hard to figure out. It's why my focus is now more on the medium term (weeks) moves as they seem to play out better.

For example, if this small B up takes out the high last Monday then one could go back and redo this Elliottwave pattern to say that Monday top was indeed the end of a small wave 3 up and small 4 down ended late last week with small 5 up in play currently. If you remember that was my original thoughts but then I changed my mind as the move down last week looked too deep to be a small wave 4 down. However, looking at it again I think it could still qualify as a wave 4, so let's be open-minded for this move up to go a little higher then last Mondays high. In both cases a move down should follow as if it turns out to be a small 5 up then it should end medium 1 up and an ABC down move for medium 2 should then begin.

If it's a lower high then we should be in small B up of medium 2 down and small C down should follow. hat's what I'll be looking for this week. A retest of last Mondays high around 3550 seems possible, and then a move down should start. It might flip from my original thoughts of a rally the last two weeks of October into the election and simply rally this week and pullback into the election.

Blame it on the fear and uncertainty of who is going to win I guess? But after the election there should be one more last rally into mid-late November, which should take out the current all time high and go into the mid-3600's to kill the last bear. I guess how high it goes will be based on how many shorts they are left to squeeze out, but it shouldn't reach 3700 I don't think. As low as 3627 and up to maybe 3670 (SPX) is my new ajusted target zone. Once that's over with we start the crash. December is going to be ugly. Have a wonderful day.