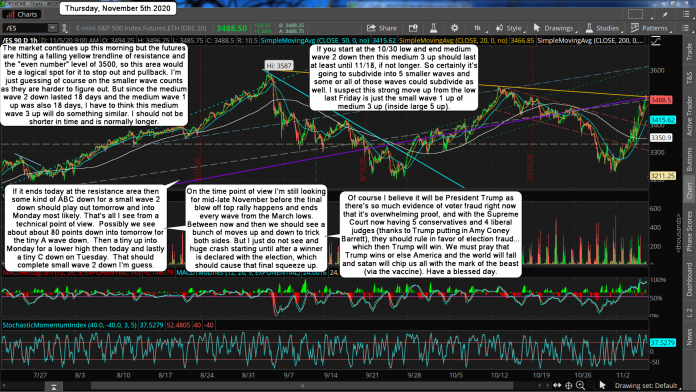 The market continues up this morning but the futures are hitting a falling yellow trendline of resistance and the "even number" level of 3500, so this area would be a logical spot for it to stop out and pullback. I'm just guessing of course on the smaller wave counts as they are harder to figure out. But since the medium wave 2 down lasted 18 days and the medium wave 1 up was also 18 days, I have to think this medium wave 3 up will do something similar. I should not be shorter in time and is normally longer.

If you start at the 10/30 low and end medium wave 2 down then this medium 3 up should last at least until 11/18, if not longer. So certainly it's going to subdivide into 5 smaller waves and some or all of those waves could subdivide as well. I suspect this strong move up from the low last Friday is just the small wave 1 up of medium 3 up (inside large 5 up).

If it ends today at the resistance area then some kind of ABC down for a small wave 2 down should play out tomorrow and into Monday most likely. That's all I see from a technical point of view.  Possibly we see about about 80 points down into tomorrow for the tiny A wave down.  Then a tiny up into Monday for a lower high then today and lastly a tiny C down on Tuesday.  That should complete small wave 2 down I'm guess.

On the time point of view I'm still looking for mid-late November before the final blow off top rally happens and ends every wave from the March lows. Between now and then we should see a bunch of moves up and down to trick both sides. But I just do not see and huge crash starting until after a winner is declared with the election, which should cause that final squeeze up.

Of course I believe it will be President Trump as there's so much evidence of voter fraud right now that it's overwhelming proof, and with the Supreme Court now having 5 conservatives and 4 liberal judges (thanks to Trump putting in Amy Coney Barrett), they should rule in favor of election fraud... which then Trump will win. We must pray that Trump wins or else America and the world will fall and satan will chip us all with the mark of the beast (via the vaccine). Have a blessed day.