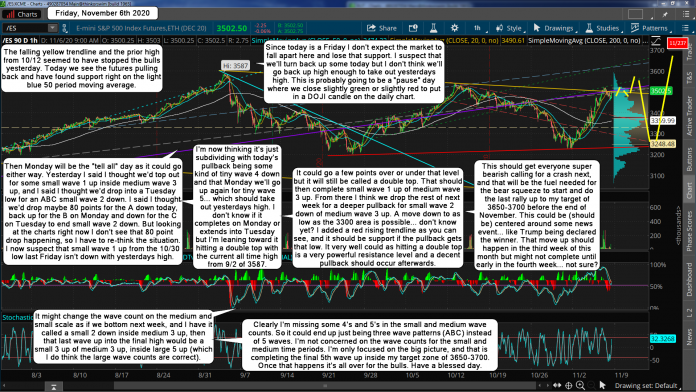 The falling yellow trendline and the prior high from 10/12 seemed to have stopped the bulls yesterday. Today we see the futures pulling back and have found support right on the light blue 50 period moving average.

Since today is a Friday I don't expect the market to fall apart here and lose that support. I suspect that we'll turn back up some today but I don't think we'll go back up high enough to take out yesterdays high. This is probably going to be a "pause" day where we close slightly green or slightly red to put in a DOJI candle on the daily chart.

I'm now thinking it's just subdividing with today's pullback being some kind of tiny wave 4 down and that Monday we'll go up again for tiny wave 5... which should take out yesterdays high. I don't know if it completes on Monday or extends into Tuesday but I'm leaning toward it hitting a double top with the current all time high from 9/2 of 3587.

It could go a few points over or under that level but it will still be called a double top. That should then complete small wave 1 up of medium wave 3 up. From there I think we drop the rest of next week for a deeper pullback for small wave 2 down of medium wave 3 up. A move down to as low as the 3300 area is possible... don't know yet? I added a red rising trendline as you can see, and it should be support if the pullback gets that low. It very well could as hitting a double top is a very powerful resistance level and a decent pullback should occur afterwards.

This should get everyone super bearish calling for a crash next, and that will be the fuel needed for the bear squeeze to start and do the last rally up to my target of 3650-3700 before the end of November. This could be (should be) centered around some news event... like Trump being declared the winner. That move up should happen in the third week of this month but might not complete until early in the fourth week... not sure?

It might change the wave count on the medium and small scale as if we bottom next week, and I have it called a small 2 down inside medium 3 up, then that last wave up into the final high would be a small 3 up of medium 3 up, inside large 5 up (which I do think the large wave counts are correct).

Clearly I'm missing some 4's and 5's in the small and medium wave counts. So it could end up just being three wave patterns (ABC) instead of 5 waves. I'm not concerned on the wave counts for the small and medium time periods. I'm only focused on the big picture, and that is completing the final 5th wave up inside my target zone of 3650-3700. Once that happens it's all over for the bulls. Have a blessed day.