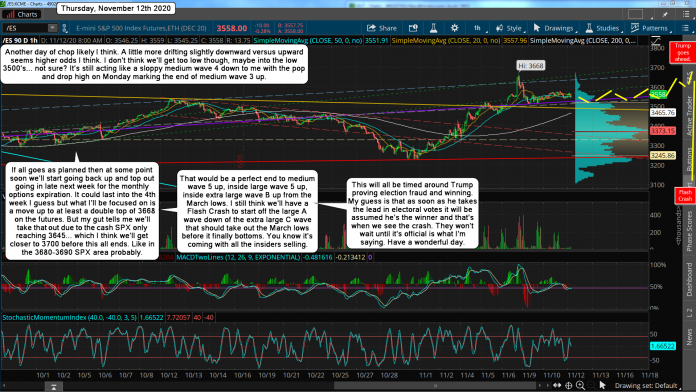 Another day of chop likely I think. A little more drifting slightly downward versus upward seems higher odds I think. I don't think we'll get too low though, maybe into the low 3500's... not sure? It's still acting like a sloppy medium wave 4 down to me with the pop and drop high on Monday marking the end of medium wave 3 up.

If all goes as planned then at some point soon we'll start going back up and top out going in late next week for the monthly options expiration. It could last into the 4th week I guess but what I'll be focused on is a move up to at least a double top of 3668 on the futures. But my gut tells me we'll take that out due to the cash SPX only reaching 3645... which I think we'll get closer to 3700 before this all ends. Like in the 3680-3690 SPX area probably.

This will all be timed around Trump proving election fraud and winning. My guess is that as soon as he takes the lead in electoral votes it will be assumed he's the winner and that's when we see the crash. They won't wait until it's official is what I'm saying. Have a wonderful day.

P.S.   The CEO of Pfizer seems to know the vacinne is worthless and won't be used, which will of course make share price of the stock drop... LOL.