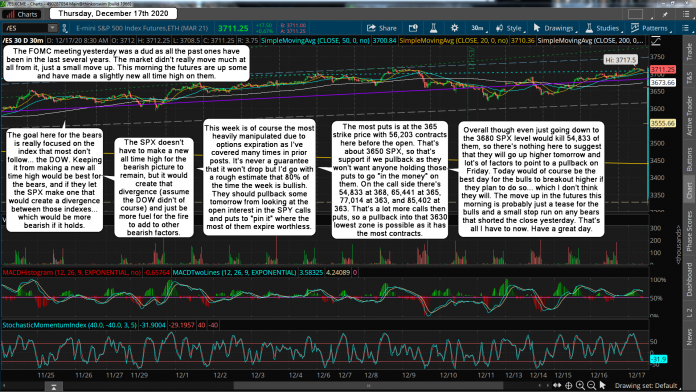 The FOMC meeting yesterday was a dud as all the past ones have been in the last several years. The market didn't really move much at all from it, just a small move up. This morning the futures are up some and have made a slightly new all time high on them.

The goal here for the bears is really focused on the index that most don't follow... the DOW. Keeping it from making a new all time high would be best for the bears, and if they let the SPX make one that would create a divergence between those indexes... which would be more bearish if it holds.

The SPX doesn't have to make a new all time high for the bearish picture to remain, but it would create that divergence (assume the DOW didn't of course) and just be more fuel for the fire to add to other bearish factors.

This week is of course the most heavily manipulated due to options expiration as I've covered many times in prior posts. It's never a guarantee that it won't drop but I'd go with a rough estimate that 80% of the time the week is bullish. They should pullback some tomorrow from looking at the open interest in the SPY calls and puts to "pin it" where the most of them expire worthless.

Overall though even just going down to the 3680 SPX level would kill 54,833 of them, so there's nothing here to suggest that they will go up higher tomorrow and lot's of factors to point to a pullback on Friday. Today would of course be the best day for the bulls to breakout higher if they plan to do so... which I don't think they will. The move up in the futures this morning is probably just a tease for the bulls and a small stop run on any bears that shorted the close yesterday. That's all I have to now. Have a great day.