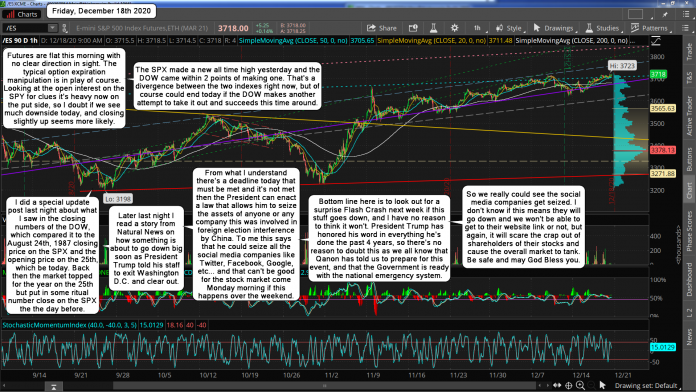 Futures are flat this morning with no clear direction in sight. The typical option expiration manipulation is in play of course. Looking at the open interest on the SPY for clues it's heavy now on the put side, so I doubt if we see much downside today, and closing slightly up seems more likely.

The SPX made a new all time high yesterday and the DOW came within 2 points of making one. That's a divergence between the two indexes right now, but of course could end today if the DOW makes another attempt to take it out and succeeds this time around.

I did a special update post last night about what I saw in the closing numbers of the DOW, which compared it to the August 24th, 1987 closing price on the SPX and the opening price on the 25th, which be today. Back then the market topped for the year on the 25th but put in some ritual number close on the SPX the the day before.

Was The Top Just Put In?

Later last night I read a story from Natural News on how something is about to go down big soon as President Trump told his staff to exit Washington D.C. and clear out. You can read the story here for yourself.

From what I understand there's a deadline today that must be met and it's not met then the President can enact a law that allows him to seize the assets of anyone or any company this was involved in foreign election interference by China. To me this says that he could seize all the social media companies like Twitter, Facebook, Google, etc... and that can't be good for the stock market come Monday morning if this happens over the weekend.

Bottom line here is to look out for a surprise Flash Crash next week if this stuff goes down, and I have no reason to think it won't. President Trump has honored his word in everything he's done the past 4 years, so there's no reason to doubt this as we all know that Qanon has told us to prepare for this event, and that the Government is ready with the national emergency system.

So we really could see the social media companies get seized. I don't know if this means they will go down and we won't be able to get to their website link or not, but again, it will scare the crap out of shareholders of their stocks and cause the overall market to tank. Be safe and may God Bless you.