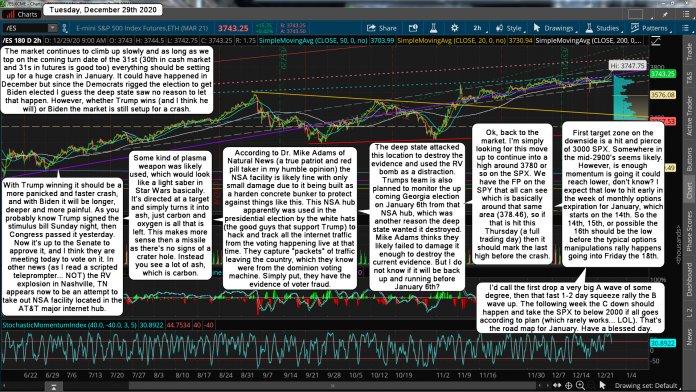 The market continues to climb up slowly and as long as we top on the coming turn date of the 31st (30th in cash market and 31s in futures is good too) everything should be setting up for a huge crash in January. It could have happened in December but since the Democrats rigged the election to get Biden elected I guess the deep state saw no reason to let that happen. However, whether Trump wins (and I think he will) or Biden the market is still setup for a crash.

With Trump winning it should be a more panicked and faster crash, and with Biden it will be longer, deeper and more painful. As you probably know Trump signed the stimulus bill Sunday night, then Congress passed it yesterday. Now it's up to the Senate to approve it, and I think they are meeting today to vote on it. In other news (as I read a scripted teleprompter... NOT) the RV explosion in Nashville, TN appears now to be an attempt to take out NSA facility located in the AT&T major internet hub.

Some kind of plasma weapon was likely used, which would look like a light saber in Star Wars basically. It's directed at a target and simply turns it into ash, just carbon and oxygen is all that is left. This makes more sense then a missile as there's no signs of a crater hole. Instead you see a lot of ash, which is carbon.

According to Dr. Mike Adams of Natural News (a true patriot and red pill taker in my humble opinion) the NSA facility is likely fine with only small damage due to it being built as a harden concrete bunker to protect against things like this. This NSA hub apparently was used in the presidential election by the white hats (the good guys that support Trump) to hack and track all the internet traffic from the voting happening live at that time. They capture "packets" of traffic leaving the country, which they know were from the dominion voting machine. Simply put, they have the evidence of voter fraud.

The deep state attacked this location to destroy the evidence and used the RV bomb as a distraction. Trumps team is also planned to monitor the up coming Georgia election on January 6th from that NSA hub, which was another reason the deep state wanted it destroyed. Mike Adams thinks they likely failed to damage it enough to destroy the current evidence. But I do not know if it will be back up and running before January 6th?

Ok, back to the market. I'm simply looking for this move up to continue into a high around 3780 or so on the SPX. We have the FP on the SPY that all can see which is basically around that same area (378.46), so if that is hit this Thursday (a full trading day) then it should mark the last high before the crash.

First target zone on the downside is a hit and pierce of 3000 SPX. Somewhere in the mid-2900's seems likely. However, is enough momentum is going it could reach lower, don't know? I expect that low to hit early in the week of monthly options expiration for January, which starts on the 14th. So the 14th, 15th, or possible the 16th should be the low before the typical options manipulations rally happens going into Friday the 18th.

I'd call the first drop a very big A wave of some degree, then that fast 1-2 day squeeze rally the B wave up. The following week the C down should happen and take the SPX to below 2000 if all goes according to plan (which rarely works... LOL). That's the road map for January. Have a blessed day.

Another person explaining the laser/plasma weapon