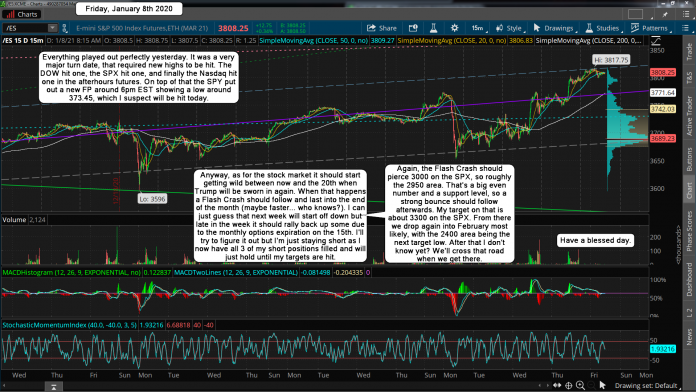 Everything played out perfectly yesterday. It was a very major turn date, that required new highs to be hit. The DOW hit one, the SPX hit one, and finally the Nasdaq hit one in the afterhours futures. On top of that the SPY put out a new FP around 6pm EST showing a low around 373.45, which I suspect will be hit today.

But first, let's touch on what happened with Trump yesterday and Wednesday. It was all part of the plan to trap the Deep State, and they fell for it! Watch the video below and check out the shorter video on Charlie Wards site.

Here's the link to Charlie Ward, where he and Simon Parkes, as well as Robert David Steele explain how President Trump is now just relaxing and trying to figure out which "Trump Card" to play next. Just too funny how these Deep State idiots were so dumb that they left their laptops out for anyone to steal. I guess that's not a surprise when you have Hunter Biden keeping all his secrets on his laptop and taking it to a local repair shop to get fixed. Did he really think that the repairman wouldn't see all the pictures when he fixed the hard drive? Some people are just born stupid I guess!

Anyway, as for the stock market it should start getting wild between now and the 20th when Trump will be sworn in again. When that happens a Flash Crash should follow and last into the end of the month (maybe faster... who knows?). I can just guess that next week will start off down but late in the week it should rally back up some due to the monthly options expiration on the 15th. I'll try to figure it out but I'm just staying short as I now have all 3 of my short positions filled and will just hold until my targets are hit.

Again, the Flash Crash should pierce 3000 on the SPX, so roughly the 2950 area. That's a big even number and a support level, so a strong bounce should follow afterwards. My target on that is about 3300 on the SPX. From there we drop again into February most likely, with the 2400 area being the next target low. After that I don't know yet? We'll cross that road when we get there.