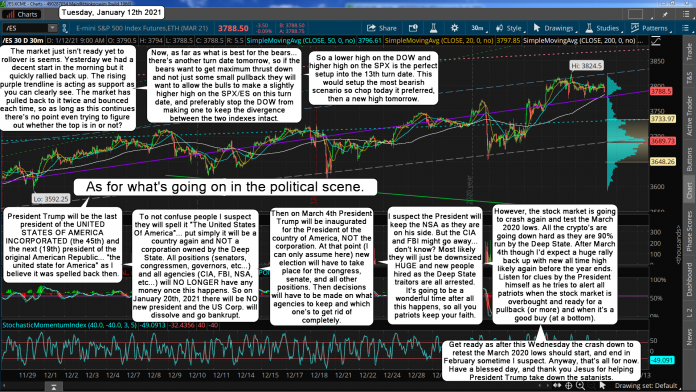 The market just isn't ready yet to rollover is seems. Yesterday we had a decent start in the morning but it quickly rallied back up. The rising purple trendline is acting as support as you can clearly see. The market has pulled back to it twice and bounced each time, so as long as this continues there's no point even trying to figure out whether the top is in or not?

Now, as far as what is best for the bears... there's another turn date tomorrow, so if the bears want to get maximum thrust down and not just some small pullback they will want to allow the bulls to make a slightly higher high on the SPX/ES on this turn date, and preferably stop the DOW from making one to keep the divergence between the two indexes intact.

So a lower high on the DOW and higher high on the SPX is the perfect setup into the 13th turn date. This would setup the most bearish scenario so chop today it preferred, then a new high tomorrow.

As for what's going on in the political scene.

President Trump will be the last president of the UNITED STATES OF AMERICA INCORPORATED (the 45th) and the next (19th) president of the original American Republic... "the united state for America" as I believe it was spelled back then.

To not confuse people I suspect they will spell it "The United States Of America"... put simply it will be a country again and NOT a corporation owned by the Deep State. All positions (senators, congressmen, governors, etc...) and all agencies (CIA, FBI, NSA, etc...) will NO LONGER have any money once this happens. So on January 20th, 2021 there will be NO new president and the US Corp. will dissolve and go bankrupt.

Then on March 4th President Trump will be inaugurated for the President of the country of America, NOT the corporation. At that point (I can only assume here) new election will have to take place for the congress, senate, and all other positions. Then decisions will have to be made on what agencies to keep and which one's to get rid of completely.

I suspect the President will keep the NSA as they are on his side. But the CIA and FBI might go away... don't know? Most likely they will just be downsized HUGE and new people hired as the Deep State traitors are all arrested. It's going to be a wonderful time after all this happens, so all you patriots keep your faith.

However, the stock market is going to crash again and test the March 2020 lows. All the crypto's are going down hard as they are 90% run by the Deep State. After March 4th though I'd expect a huge rally back up with new all time high likely again before the year ends. Listen for clues by the President himself as he tries to alert all patriots when the stock market is overbought and ready for a pullback (or more) and when it's a good buy (at a bottom).

Get ready as after this Wednesday the crash down to retest the March 2020 lows should start, and end in February sometime I suspect. Anyway, that's all for now. Have a blessed day, and thank you Jesus for helping President Trump take down the satanists.

In this video Michael explain it all on about the US Corp. and the new election on March 4th, 2021

(starts around the 18 minute mark)