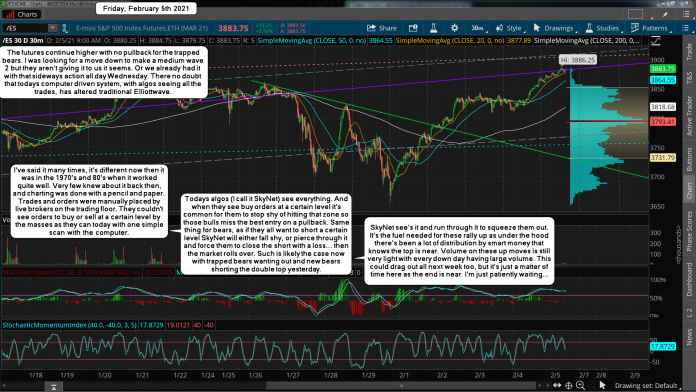 The futures continue higher with no pullback for the trapped bears. I was looking for a move down to make a medium wave 2 but they aren't giving it to us it seems. Or we already had it with that sideways action all day23w Wednesday. There no doubt that todays computer driven system, with algos seeing all the trades, has altered traditional Elliottwave.

I've said it many times, it's different now then it was in the 1970's and 80's when it worked quite well. Very few knew about it back then, and charting was done with a pencil and paper. Trades and orders were manually placed by live brokers on the trading floor. They couldn't see orders to buy or sell at a certain level by the masses as they can today with one simple scan with the computer.

Todays algos (I call it SkyNet) see everything. And when they see buy orders at a certain level it's common for them to stop shy of hitting that zone so those bulls miss the best entry on a pullback. Same thing for bears, as if they all want to short a certain level SkyNet will either fall shy, or pierce through it and force them to close the short with a loss... then the market rolls over. Such is likely the case now with trapped bears wanting out and new bears shorting the double top yesterday.

SkyNet see's it and run through it to squeeze them out. It's the fuel needed for these rally up as under the hood there's been a lot of distribution by smart money that knows the top is near. Volume on these up moves is still very light with every down day having large volume. This could drag out all next week too, but it's just a matter of time here as the end is near. I'm just patiently waiting...