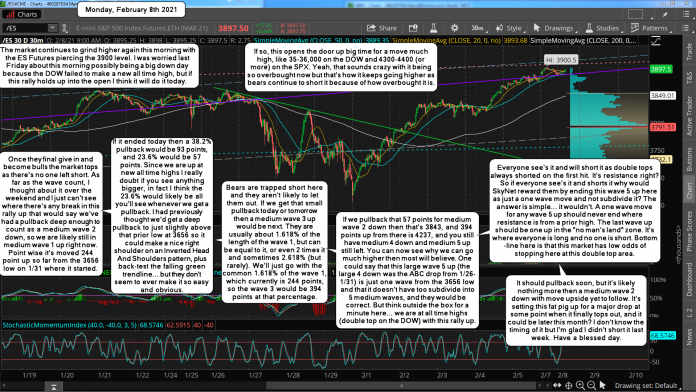 The market continues to grind higher again this morning with the ES Futures piercing the 3900 level. I was worried last Friday about this morning possibly being a big down day because the DOW failed to make a new all time high, but if this rally holds up into the open I think it will do it today.

If so, this opens the door up big time for a move much high, like 35-36,000 on the DOW and 4300-4400 (or more) on the SPX. Yeah, that sounds crazy with it being so overbought now but that's how it keeps going higher as bears continue to short it because of how overbought it is.

Once they final give in and become bulls the market tops as there's no one left short. As far as the wave count, I thought about it over the weekend and I just can't see where there's any break in this rally up that would say we've had a pullback deep enough to count as a medium wave 2 down, so we are likely still in medium wave 1 up right now. Point wise it's moved 244 point up so far from the 3656 low on 1/31 where it started.

If it ended today then a 38.2% pullback would be 93 points, and 23.6% would be 57 points. Since we are up at new all time highs I really doubt if you see anything bigger, in fact I think the 23.6% would likely be all you'll see whenever we get a pullback. I had previously thought we'd get a deep pullback to just slightly above that prior low at 3656 so it could make a nice right shoulder on an Inverted Head And Shoulders pattern, plus back-test the falling green trendline... but they don't seem to ever make it so easy and obvious.

Bears are trapped short here and they aren't likely to let them out. If we get that small pullback today or tomorrow then a medium wave 3 up would be next. They are usually about 1.618% of the length of the wave 1, but can be equal to it, or even 2 times it and sometimes 2.618% (but rarely). We'll just go with the common 1.618% of the wave 1, which currently is 244 points, so the wave 3 would be 394 points at that percentage.

If we pullback that 57 points for medium wave 2 down then that's 3843, and 394 points up from there is 4237, and you still have medium 4 down and medium 5 up still left. You can now see why we can go much higher then most will believe. One could say that this large wave 5 up (the large 4 down was the ABC drop from 1/26-1/31) is just one wave from the 3656 low and that it doesn't have too subdivide into 5 medium waves, and they would be correct. But think outside the box for a minute here... we are at all time highs (double top on the DOW) with this rally up.

Everyone see's it and will short it as double tops always shorted on the first hit. It's resistance right? So if everyone see's it and shorts it why would SkyNet reward them by ending this wave 5 up here as just a one wave move and not subdivide it? The answer is simple... it wouldn't. A one wave move for any wave 5 up should never end where resistance is from a prior high. The last wave up should be one up in the "no man's land" zone. It's where everyone is long and no one is short. Bottom-line here is that this market has low odds of stopping here at this double top area.

It should pullback soon, but it's likely nothing more then a medium wave 2 down with move upside yet to follow. It's setting this fat pig up for a major drop at some point when it finally tops out, and it could be later this month? I don't know the timing of it but I'm glad I didn't short it last week. Have a blessed day.