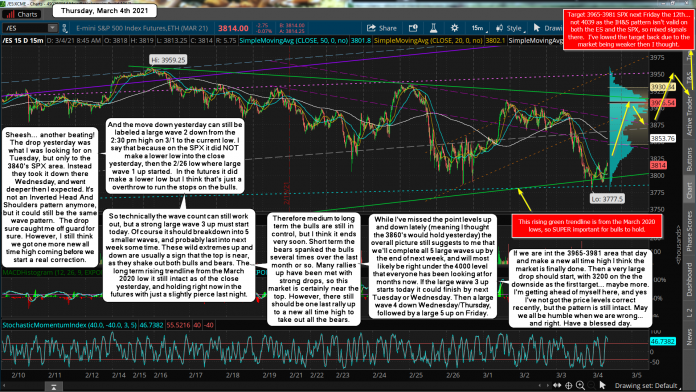 Sheesh... another beating! The drop yesterday was what I was looking for on Tuesday, but only to the 3840's SPX area. Instead they took it down there Wednesday, and went deeper then I expected. It's not an Inverted Head And Shoulders pattern anymore, but it could still be the same wave pattern.  The drop sure caught me off guard for sure. However, I still think we got one more new all time high coming before we start a real correction.

And the move down yesterday can still be labeled a large wave 2 down from the 2:30 pm high on 3/1 to the current low. I say that because on the SPX it did NOT make a lower low into the close yesterday, then the 2/26 low where large wave 1 up started.  In the futures it did make a lower low but I think that's just a overthrow to run the stops on the bulls.

So technically the wave count can still work out, but a strong large wave 3 up must start today. Of course it should breakdown into 5 smaller waves, and probably last into next week some time. These wild extremes up and down are usually a sign that the top is near, as they shake out both bulls and bears. The long term rising trendline from the March 2020 low it still intact as of the close yesterday, and holding right now in the futures with just a slightly pierce last night.

Therefore medium to long term the bulls are still in control, but I think it ends very soon. Short term the bears spanked the bulls several times over the last month or so. Many rallies up have been met with strong drops, so this market is certainly near the top. However, there still should be one last rally up to a new all time high to take out all the bears.

While I've missed the point levels up and down lately (meaning I thought the 3860's would hold yesterday) the overall picture still suggests to me that we'll complete all 5 large waves up by the end of next week, and will most likely be right under the 4000 level that everyone has been looking at for months now. If the large wave 3 up starts today it could finish by next Tuesday or Wednesday. Then a large wave 4 down Wednesday/Thursday, followed by a large 5 up on Friday.

If we are int the 3965-3981 area that day and make a new all time high I think the market is finally done. Then a very large drop should start, with 3200 on the the downside as the first target... maybe more. I'm getting ahead of myself here, and yes I've not got the price levels correct recently, but the pattern is still intact. May we all be humble when we are wrong... and right. Have a blessed day.