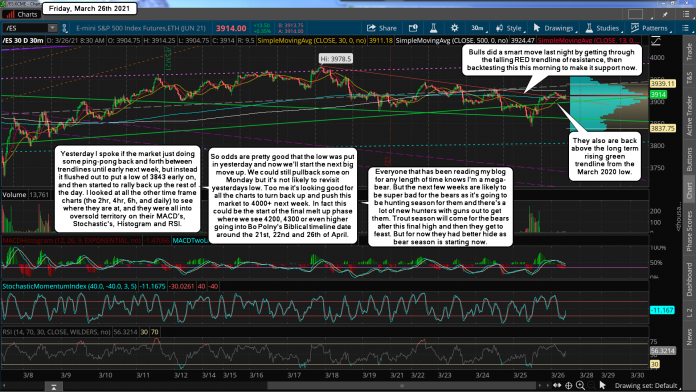 Yesterday I spoke if the market just doing some ping-pong back and forth between trendlines until early next week, but instead it flushed out to put a low of 3843 early on, and then started to rally back up the rest of the day. I looked at all the other time frame charts (the 2hr, 4hr, 6h, and daily) to see where they are at, and they were all into oversold territory on their MACD's, Stochastic's, Histogram and RSI.

So odds are pretty good that the low was put in yesterday and now we'll start the next big move up. We could still pullback some on Monday but it's not likely to revisit yesterdays low. Too me it's looking good for all the charts to turn back up and push this market to 4000+ next week. In fact this could be the start of the final melt up phase where we see 4200, 4300 or even higher going into Bo Polny's Biblical timeline date around the 21st, 22nd and 26th of April.

Everyone that has been reading my blog for any length of time knows I'm a mega-bear. But the next few weeks are likely to be super bad for the bears as it's going to be hunting season for them and there's a lot of new hunters with guns out to get them. Trout season will come for the bears after this final high and then they get to feast. But for now they had better hide as bear season is starting now.