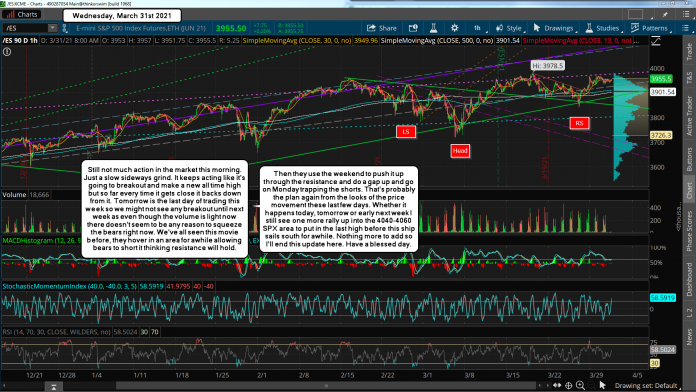 Still not much action in the market this morning. Just a slow sideways grind. It keeps acting like it's going to breakout and make a new all time high but so far every time it gets close it backs down from it. Tomorrow is the last day of trading this week so we might not see any breakout until next week as even though the volume is light now there doesn't seem to be any reason to squeeze the bears right now. We've all seen this movie before, they hover in an area for awhile allowing bears to short it thinking resistance will hold.

Then they use the weekend to push it up through the resistance and do a gap up and go on Monday trapping the shorts. That's probably the plan again from the looks of the price movement these last few days. Whether it happens today, tomorrow or early next week I still see one more rally up into the 4040-4060 SPX area to put in the last high before this ship sails south for awhile. Nothing more to add so I'll end this update here. Have a blessed day.