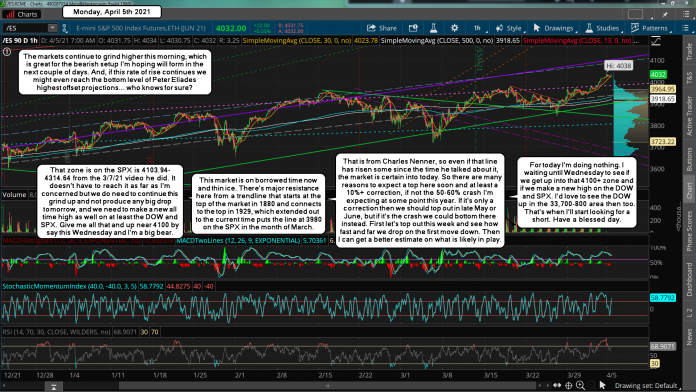 The markets continue to grind higher this morning, which is great for the bearish setup I'm hoping will form in the next couple of days. And, if this rate of rise continues we might even reach the bottom level of Peter Eliades highest offset projections... who knows for sure?

This market is on borrowed time now and thin ice. There's major resistance here from a trendline that starts at the top of the market in 1880 and connects to the top in 1929, which extended out to the current time puts the line at 3980 on the SPX in the month of March.

That is from Charles Nenner, so even if that line has risen some since the time he talked about it, the market is certain into today. So there are many reasons to expect a top here soon and at least a 10%+ correction, if not the 50-60% crash I'm expecting at some point this year. If it's only a correction then we should top out in late May or June, but if it's the crash we could bottom there instead. First let's top out this week and see how fast and far we drop on the first move down. Then I can get a better estimate on what is likely in play.

For today I'm doing nothing. I waiting until Wednesday to see if we get up into that 4100+ zone and if we make a new high on the DOW and SPX. I'd love to see the DOW up in the 33,700-800 area then too. That's when I'll start looking for a short. Have a blessed day.