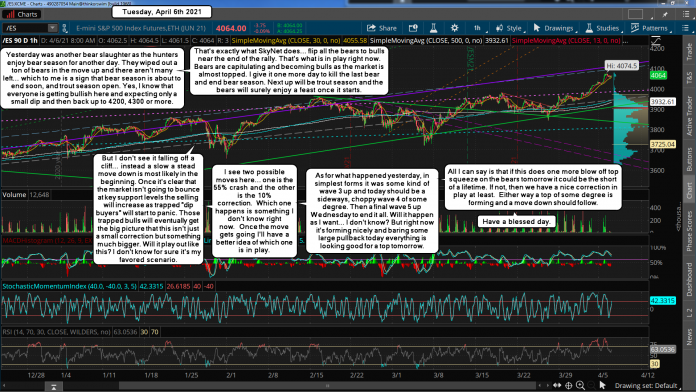 Yesterday was another bear slaughter as the hunters enjoy bear season for another day. They wiped out a ton of bears in the move up and there aren't many left... which to me is a sign that bear season is about to end soon, and trout season open. Yes, I know that everyone is getting bullish here and expecting only a small dip and then back up to 4200, 4300 or more.

That's exactly what SkyNet does... flip all the bears to bulls near the end of the rally. That's what is in play right now. Bears are capitulating and becoming bulls as the market is almost topped. I give it one more day to kill the last bear and end bear season. Next up will be trout season and the bears will surely enjoy a feast once it starts.

But I don't see it falling off a cliff... instead a slow a stead move down is most likely in the beginning. Once it's clear that the market isn't going to bounce at key support levels the selling will increase as trapped "dip buyers" will start to panic. Those trapped bulls will eventually get the big picture that this isn't just a small correction but something much bigger. Will it play out like this? I don't know for sure it's my favored scenario.

I see two possible moves here... one is the 55% crash and the other is the 10% correction.  Which one happens is something I don't know right now.  Once the move gets going I'll have a better idea of which one is in play.

As for what happened yesterday, in simplest forms it was some kind of wave 3 up and today should be a sideways, choppy wave 4 of some degree. Then a final wave 5 up Wednesday to end it all. Will it happen as I want... I don't know? But right now it's forming nicely and baring some large pullback today everything is looking good for a top tomorrow.

All I can say is that if this does one more blow off top squeeze on the bears tomorrow it could be the short of a lifetime. If not, then we have a nice correction in play at least.  Either way a top of some degree is forming and a move down should follow.