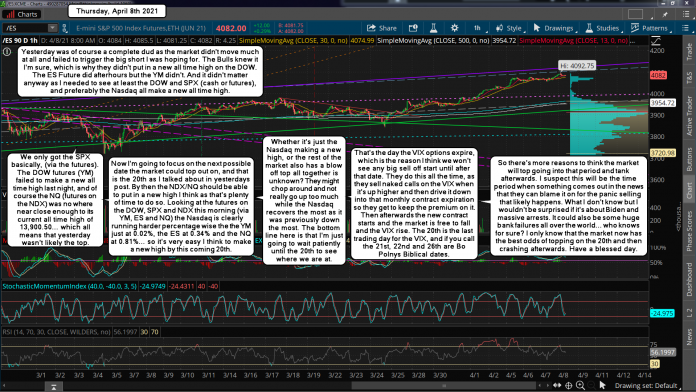 Yesterday was of course a complete dud as the market didn't move much at all and failed to trigger the big short I was hoping for. The Bulls knew it I'm sure, which is why they didn't put in a new all time high on the DOW. The ES Future did afterhours but the YM didn't. And it didn't matter anyway as I needed to see at least the DOW and SPX (cash or futures), and preferably the Nasdaq all make a new all time high.

We only got the SPX basically, (via the futures). The DOW futures (YM) failed to make a new all time high last night, and of course the NQ (futures on the NDX) was no where near close enough to its current all time high of 13,900.50... which all means that yesterday wasn't likely the top.

Now I'm going to focus on the next possible date the market could top out on, and that is the 20th as I talked about in yesterdays post. By then the NDX/NQ should be able to put in a new high I think as that's plenty of time to do so. Looking at the futures on the DOW, SPX and NDX this morning (via YM, ES and NQ) the Nasdaq is clearly running harder percentage wise the YM just at 0.02%, the ES at 0.34% and the NQ at 0.81%... so it's very easy I think to make a new high by this coming 20th.

Whether it's just the Nasdaq making a new high, or the rest of the market also has a blow off top all together is unknown? They might chop around and not really go up too much while the Nasdaq recovers the most as it was previously down the most. The bottom line here is that I'm just going to wait patiently until the 20th to see where we are at.

That's the day the VIX options expire, which is the reason I think we won't see any big sell off start until after that date. They do this all the time, as they sell naked calls on the VIX when it's up higher and then drive it down into that monthly contract expiration so they get to keep the premium on it. Then afterwards the new contract starts and the market is free to fall and the VIX rise. The 20th is the last trading day for the VIX, and if you call the 21st, 22nd and 26th are Bo Polnys Biblical dates.

So there's more reasons to think the market will top going into that period and tank afterwards. I suspect this will be the time period when something comes out in the news that they can blame it on for the panic selling that likely happens. What I don't know but I wouldn't be surprised if it's about Biden and massive arrests. It could also be some huge bank failures all over the world... who knows for sure? I only know that the market now has the best odds of topping on the 20th and then crashing afterwards. Have a blessed day.