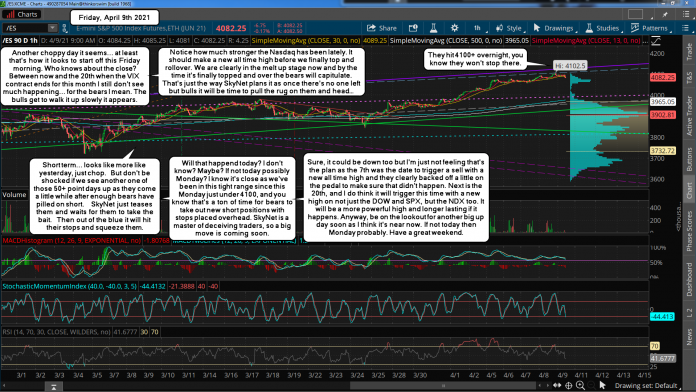 Another choppy day it seems... at least that's how it looks to start off this Friday morning. Who knows about the close? Between now and the 20th when the VIX contract ends for this month I still don't see much happening... for the bears I mean. The bulls get to walk it up slowly it appears.

Notice how much stronger the Nasdaq has been lately. It should make a new all time high before we finally top and rollover. We are clearly in the melt up stage now and by the time it's finally topped and over the bears will capitulate. That's just the way SkyNet plans it as once there's no one left but bulls it will be time to pull the rug on them and head south in a big way.

Short term... looks like more like yesterday, just chop.  But don't be shocked if we see another one of those 50+ point days up as they come a little while after enough bears have pilled on short.   SkyNet just teases them and waits for them to take the bait.  Then out of the blue it will hit their stops and squeeze them.

Will that happend today? I don't know? Maybe? If not today possibly Monday? I know it's close as we've been in this tight range since this Monday just under 4100, and you know that's a ton of time for bears to take out new short positions with stops placed overhead. SkyNet is a master of deceiving traders, so a big move is coming soon.

Sure, it could be down too but I'm just not feeling that's the plan as the 7th was the date to trigger a sell with a new all time high and they clearly backed off a little on the pedal to make sure that didn't happen. Next is the 20th, and I do think it will trigger this time with a new high on not just the DOW and SPX, but the NDX too. It will be a more powerful high and longer lasting if it happens. Anyway, be on the lookout for another big up day soon as I think it's near now. If not today then Monday probably. Have a great weekend.