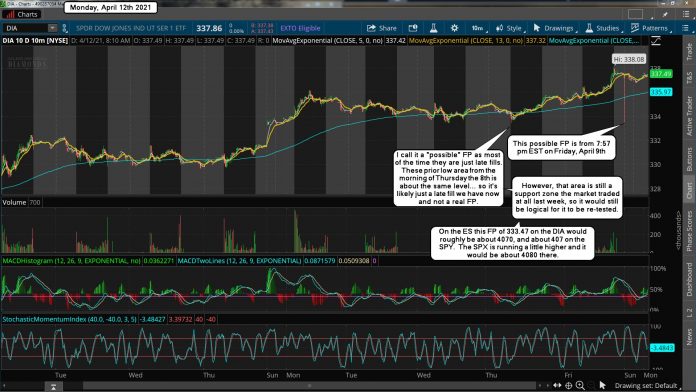 Afterhours last Friday at 7:57 pm EST we got a possible FP on the DIA, which is for a low of 333.47 (notice the 4+7=11, and the 333 are multiples of "eleven"). This is probably a late fill as it's basically the early morning low last Thursday, but I still find in common to see this possible FP's hit.

Real or not, it's just a move back down to horizontal support, so not a big surprise there if we do pullback a little today and/or tomorrow. On the SPY it's just a little over 407, and the ES is a little over 4070. The SPX would be about 4080 I believe as it's running a little higher then the ES right now. 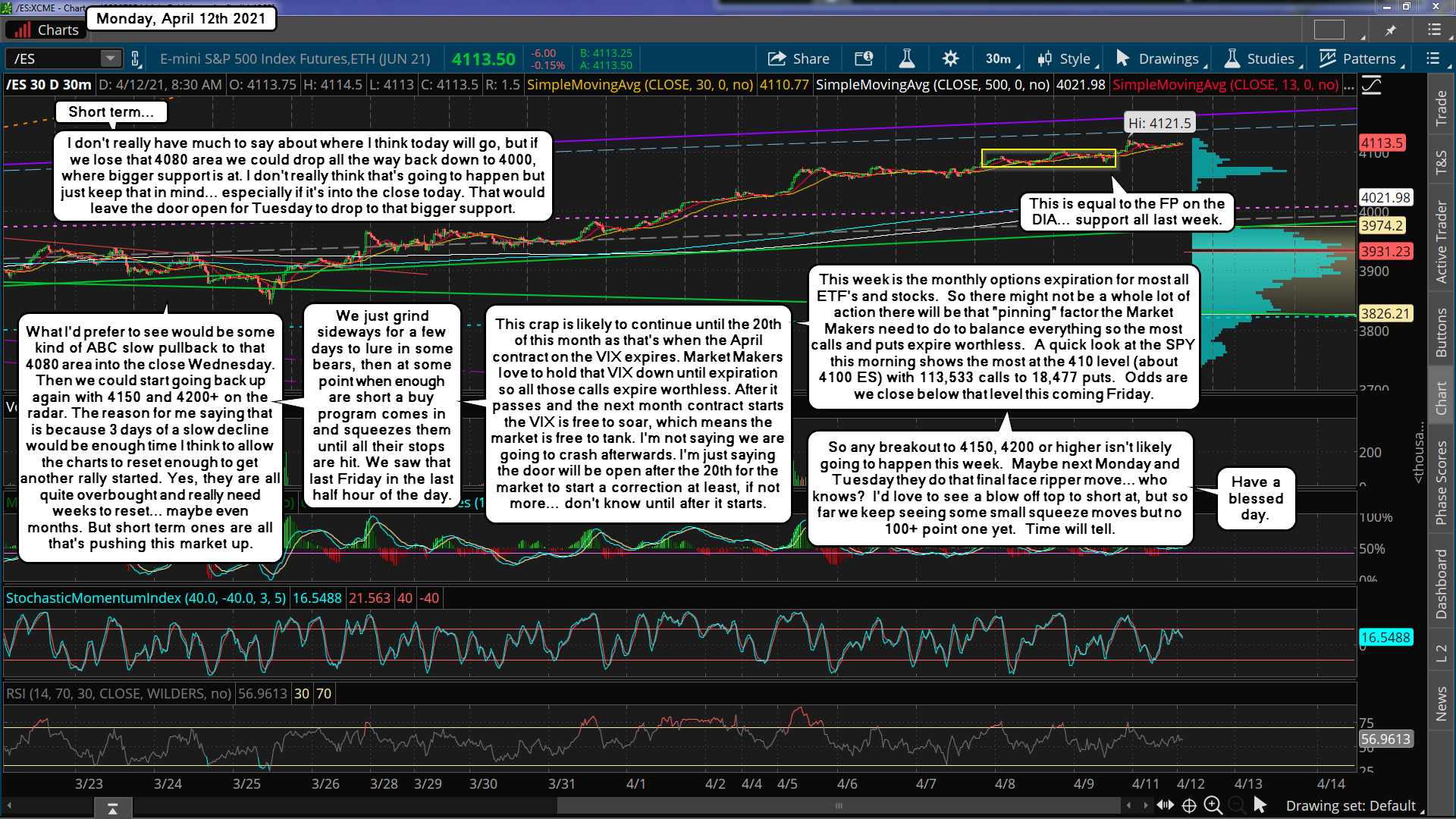 I don't really have much to say about where I think today will go, but if we lose that 4080 area we could drop all the way back down to 4000, where bigger support is at. I don't really think that's going to happen but just keep that in mind... especially if it's into the close today. That would leave the door open for Tuesday to drop to that bigger support.

What I'd prefer to see would be some kind of ABC slow pullback to that 4080 area into the close Wednesday. Then we could start going back up again with 4150 and 4200+ on the radar. The reason for me saying that is because 3 days of a slow decline would be enough time I think to allow the charts to reset enough to get another rally started. Yes, they are all quite overbought and really need weeks to reset... maybe even months. But short term ones are all that's pushing this market up.

We just grind sideways for a few days to lure in some bears, then at some point when enough are short a buy program comes in and squeezes them until all their stops are hit. We saw that last Friday in the last half hour of the day.

This crap is likely to continue until the 20th of this month as that's when the April contract on the VIX expires. Market Makers love to hold that VIX down until expiration so all those calls expire worthless. After it passes and the next month contract starts the VIX is free to soar, which means the market is free to tank. I'm not saying we are going to crash afterwards. I'm just saying the door will be open after the 20th for the market to start a correction at least, if not more... don't know until after it starts.

This week is the monthly options expiration for most all ETF's and stocks.  So there might not be a whole lot of action there will be that "pinning" factor the Market Makers need to do to balance everything so the most calls and puts expire worthless.  A quick look at the SPY this morning shows the most at the 410 level (about 4100 ES) with 113,533 calls to 18,477 puts.  Odds are we close below that level this coming Friday.

So any breakout to 4150, 4200 or higher isn't likely going to happen this week.  Maybe next Monday and Tuesday they do that final face ripper move... who knows?  I'd love to see a blow off top to short at, but so far we keep seeing some small squeeze moves but no 100+ point one yet.  Time will tell.