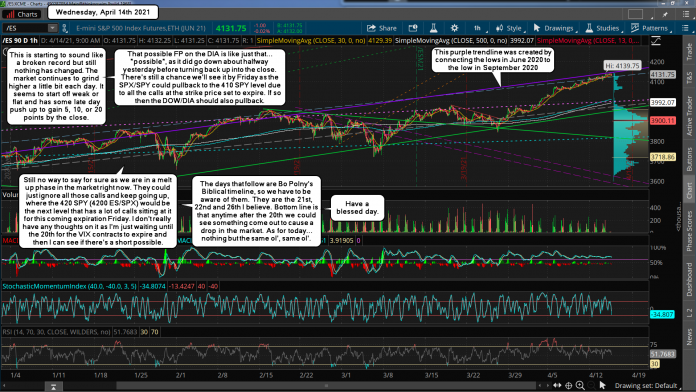 This is starting to sound like a broken record but still nothing has changed. The market continues to grind higher a little bit each day. It seems to start off weak or flat and has some late day push up to gain 5, 10, or 20 points by the close.

That possible FP on the DIA is like just that... "possible", as it did go down about halfway yesterday before turning back up into the close. There's still a chance we'll see it by Friday as the SPX/SPY could pullback to the 410 SPY level due to all the calls at the strike price set to expire. If so then the DOW/DIA should also pullback.

Still no way to say for sure as we are in a melt up phase in the market right now. They could just ignore all those calls and keep going up, where the 420 SPY (4200 ES/SPX) would be the next level that has a lot of calls sitting at it for this coming expiration Friday. I don't really have any thoughts on it as I'm just waiting until the 20th for the VIX contracts to expire and then I can see if there's a short possible.

The days that follow are Bo Polny's Biblical timeline, so we have to be aware of them. They are the 21st, 22nd and 26th I believe. Bottom line is that anytime after the 20th we could see something come out to cause a drop in the market. As for today... nothing but the same ol', same ol'.