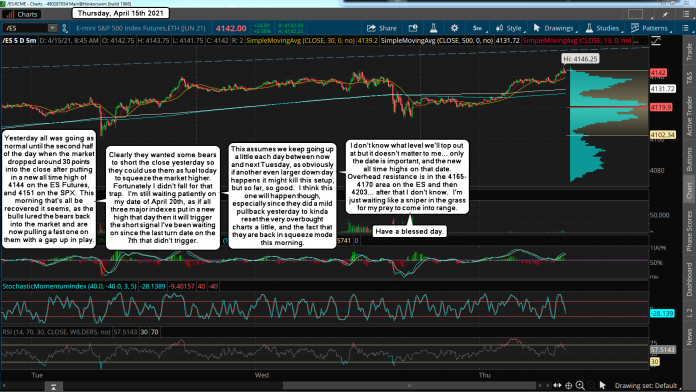 Yesterday all was going as normal until the second half of the day when the market dropped around 30 points into the close after putting in a new all time high of 4144 on the ES Futures, and 4151 on the SPX. This morning that's all be recovered it seems, as the bulls lured the bears back into the market and are now pulling a fast one on them with a gap up in play.

Clearly they wanted some bears to short the close yesterday so they could use them as fuel today to squeeze the market higher. Fortunately I didn't fall for that trap.  I'm still waiting patiently on my date of April 20th, as if all three major indexes put in a new high that day then it will trigger the short signal I've been waiting on since the last turn date on the 7th that didn't trigger.

This assumes we keep going up a little each day between now and next Tuesday, as obviously if another even larger down day happens it might kill this setup, but so far, so good.  I think this one will happen though, especially since they did a mild pullback yesterday to kinda reset the very overbought charts a little, and the fact that they are back in squeeze mode this morning.

I don't know what level we'll top out at but it doesn't matter to me... only the date is important, and the new all time highs on that date. Overhead resistance is in the 4165-4170 area on the ES and then 4203... after that I don't know.  I'm just waiting like a sniper in the grass for my prey to come into range.