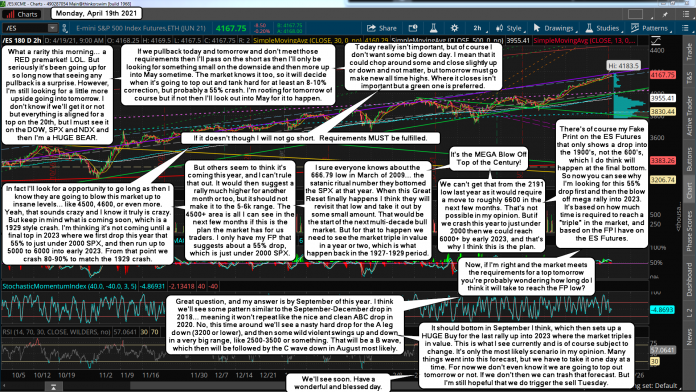 What a rarity this morning... a RED premarket! LOL. But seriously it's been going up for so long now that seeing any pullback is a surprise. However, I'm still looking for a little more upside going into tomorrow. I don't know if we'll get it or not but everything is aligned for a top on the 20th, but I must see it on the DOW, SPX and NDX and then I'm a HUGE BEAR.

If we pullback today and tomorrow and don't meet those requirements then I'll pass on the short as then I'll only be looking for something small on the downside and then more up into May sometime. The market knows it too, so it will decide when it's going to top out and tank hard for at least an 8-10% correction, but probably a 55% crash. I'm rooting for tomorrow of course but if not then I'll look out into May for it to happen.

Today really isn't important, but of course I don't want some big down day. I mean that it could chop around some and close slightly up or down and not matter, but tomorrow must go make new all time highs. Where it closes isn't important but a green one is preferred.

If it doesn't though I will not go short.  Requirements MUST be fulfilled.

But others seem to think it's coming this year, and I can't rule that out. It would then suggest a rally much higher for another month or too, but it should not make it to the 5-6k range. The 4500+ area is all I can see in the next few months if this is the plan the market has for us traders. I only have my FP that suggests about a 55% drop, which is just under 2000 SPX.

I sure everyone knows about the 666.79 low in March of 2009... the satanic ritual number they bottomed the SPX at that year. When this Great Reset finally happens I think they will revisit that low and take it out by some small amount. That would be the start of the next multi-decade bull market. But for that to happen we need to see the market triple in value in a year or two, which is what happen back in the 1927-1929 period.

It's the MEGA Blow Off Top of the Century!

There's of course my Fake Print on the ES Futures that only shows a drop into the 1900's, not the 600's, which I do think will happen at the final bottom. So now you can see why I'm looking for this 55% drop first and then the blow off mega rally into 2023. It's based on how much time is required to reach a "triple" in the market, and based on the FP I have on the ES Futures.

Now, if I'm right and the market meets the requirements for a top tomorrow you're probably wondering how long do I think it will take to reach the FP low?

Great question, and my answer is by September of this year. I think we'll see some pattern similar to the September-December drop in 2018... meaning it won't repeat like the nice and clean ABC drop in 2020. No, this time around we'll see a nasty hard drop for the A leg down (3200 or lower), and then some wild violent swings up and down in a very big range, like 2500-3500 or something. That will be a B wave, which then will be followed by the C wave down in August most likely.

It should bottom in September I think, which then sets up a HUGE Buy for the last rally up into 2023 where the market triples in value. This is what I see currently and is of course subject to change. It's only the most likely scenario in my opinion. Many things went into this forecast, but we have to take it one day at a time. For now we don't even know it we are going to top out tomorrow or not. If we don't then we can trash that forecast. But I'm still hopeful that we do trigger the sell Tuesday.

We'll see soon. Have a wonderful and blessed day.