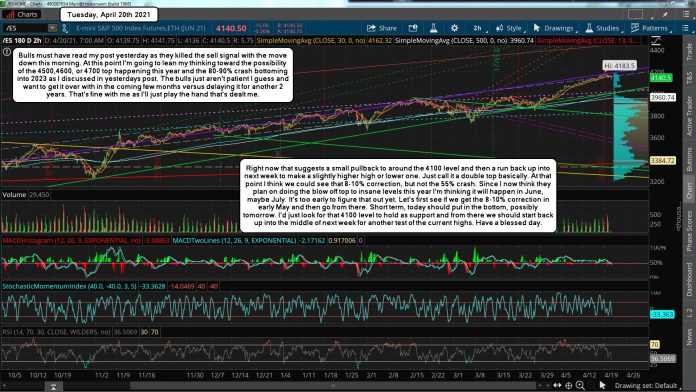 Bulls must have read my post yesterday as they killed the sell signal with the move down this morning. At this point I'm going to lean my thinking toward the possibility of the 4500,4600, or 4700 top happening this year and the 80-90% crash bottoming into 2023 as I discussed in yesterdays post. The bulls just aren't patient I guess and want to get it over with in the coming few months versus delaying it for another 2 years. That's fine with me as I'll just play the hand that's dealt me.

Right now that suggests a small pullback to around the 4100 level and then a run back up into next week to make a slightly higher high or lower one. Just call it a double top basically. At that point I think we could see that 8-10% correction, but not the 55% crash. Since I now think they plan on doing the blow off top to insane levels this year I'm thinking it will happen in June, maybe July. It's too early to figure that out yet. Let's first see if we get the 8-10% correction in early May and then go from there. Short term, today should put in the bottom, possibly tomorrow. I'd just look for that 4100 level to hold as support and from there we should start back up into the middle of next week for another test of the current highs. Have a blessed day.