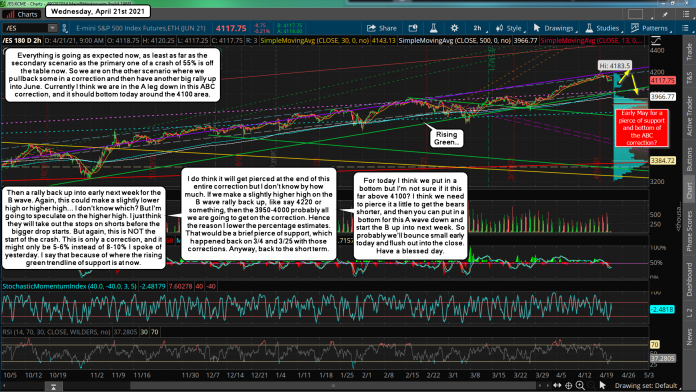 Everything is going as expected now, as least as far as the secondary scenario as the primary one of a crash of 55% is off the table now. So we are on the other scenario where we pullback some in a correction and then have another big rally up into June. Currently I think we are in the A leg down in this ABC correction, and it should bottom today around the 4100 area.

Then a rally back up into early next week for the B wave. Again, this could make a slightly lower high or higher high... I don't know which? But I'm going to speculate on the higher high. I just think they will take out the stops on shorts before the bigger drop starts. But again, this is NOT the start of the crash. This is only a correction, and it might only be 5-6% instead of 8-10% I spoke of yesterday. I say that because of where the rising green trendline of support is at now.

I do think it will get pierced at the end of this entire correction but I don't know by how much. If we make a slightly higher high on the B wave rally back up, like say 4220 or something, then the 3950-4000 probably all we are going to get on the correction. Hence the reason I lower the percentage estimates. That would be a brief pierce of support, which happened back on 3/4 and 3/25 with those corrections. Anyway, back to the short term.

For today I think we put in a bottom but I'm not sure if it this far above 4100? I think we need to pierce it a little to get the bears shorter, and then you can put in a bottom for this A wave down and start the B up into next week. So probably we'll bounce small early today and flush out into the close. Have a blessed day.