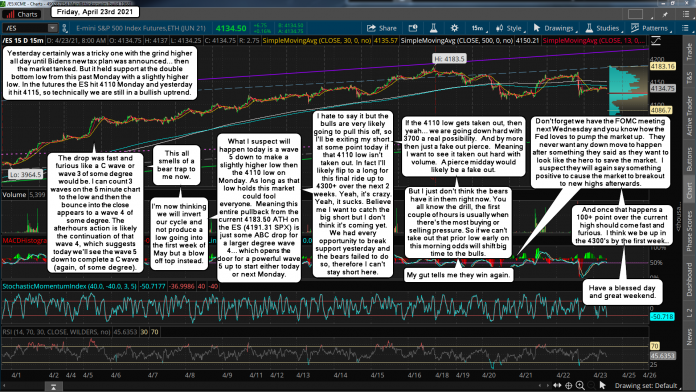 Yesterday certainly was a tricky one with the grind higher all day until Bidens new tax plan was announced... then the market tanked. But it held support at the double bottom low from this past Monday with a slightly higher low. In the futures the ES hit 4110 Monday and yesterday it hit 4115, so technically we are still in a bullish uptrend.

The drop was fast and furious like a C wave or wave 3 of some degree would be. I can count 3 waves on the 5 minute chart to the low and then the bounce into the close appears to a wave 4 of some degree. The afterhours action is likely the continuation of that wave 4, which suggests today we'll see the wave 5 down to complete a C wave (again, of some degree).

This all smells of a bear trap to me now.

I'm now thinking we will invert our cycle and not produce a low going into the first week of May but a blow off top instead.

What I suspect will happen today is a wave 5 down to make a slightly higher low then the 4110 low on Monday. As long as that low holds this market could fool everyone.  Meaning this entire pullback from the current 4183.50 ATH on the ES (4191.31 SPX) is just some ABC drop for a larger degree wave 4... which opens the door for a powerful wave 5 up to start either today or next Monday.

I hate to say it but the bulls are very likely going to pull this off, so I'll be exiting my short at some point today if that 4110 low isn't taken out. In fact I'll likely flip to a long for this final ride up to 4300+ over the next 2 weeks. Yeah, it's crazy. Yeah, it sucks. Believe me I want to catch the big short but I don't think it's coming yet. We had every opportunity to break support yesterday and the bears failed to do so, therefore I can't stay short here.

If the 4110 low gets taken out, then yeah... we are going down hard with 3700 a real possibility.  And by more then just a fake out pierce.  Meaning I want to see it taken out hard with volume.  A pierce midday would likely be a fake out.

But I just don't think the bears have it in them right now. You all know the drill, the first couple of hours is usually when there's the most buying or selling pressure. So if we can't take out that prior low early on this morning odds will shift big time to the bulls.

My gut tells me they win again.

Don't forget we have the FOMC meeting next Wednesday and you know how the Fed loves to pump the market up.  They never want any down move to happen after something they said as they want to look like the hero to save the market.  I suspect they will again say something positive to cause the market to breakout to new highs afterwards.

And once that happens a 100+ point over the current high should come fast and furious.  I think we be up in the 4300's by the first week of May.  We shall see.

Have a blessed day and great weekend.