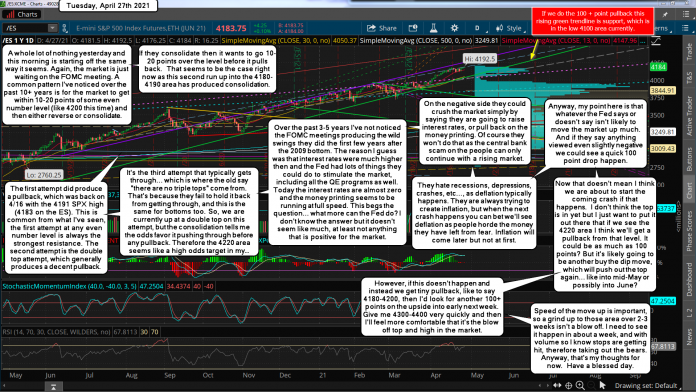 A whole lot of nothing yesterday and this morning is starting off the same way it seems. Again, the market is just waiting on the FOMC meeting. A common pattern I've noticed over the past 10+ years is for the market to get within 10-20 points of some even number level (like 4200 this time) and then either reverse or consolidate.

If they consolidate then it wants to go 10-20 points over the level before it pulls back.  That seems to be the case right now as this second run up into the 4180-4190 area has produced consolidation.

The first attempt did produce a pullback, which was back on 4/16 with the 4191 SPX high (4183 on the ES). This is common from what I've seen, the first attempt at any even number level is always the strongest resistance. The second attempt is the double top attempt, which generally produces a decent pullback.

It's the third attempt that typically gets through... which is where the old say "there are no triple tops" come from. That's because they fail to hold it back from getting through, and this is the same for bottoms too. So, we are currently up at a double top on this attempt, but the consolidation tells me the odds favor it pushing through before any pullback. Therefore the 4220 area seems like a high odds target in my opinion.

Over the past 3-5 years I've not noticed the FOMC meetings producing the wild swings they did the first few years after the 2009 bottom. The reason I guess was that interest rates were much higher then and the Fed had lots of things they could do to stimulate the market, including all the QE programs as well. Today the interest rates are almost zero and the money printing seems to be running at full speed. This begs the question... what more can the Fed do? I don't know the answer but it doesn't seem like much, at least not anything that is positive for the market.

On the negative side they could crush the market simply by saying they are going to raise interest rates, or pull back on the money printing. Of course they won't do that as the central bank scam on the people can only continue with a rising market.

They hate recessions, depressions, crashes, etc..., as deflation typically happens. They are always trying to create inflation, but when the next crash happens you can bet we'll see deflation as people horde the money they have left from fear. Inflation will come later but not at first.

Anyway, my point here is that whatever the Fed says or doesn't say isn't likely to move the market up much. And if they say anything viewed even slightly negative we could see a quick 100 point drop happen.

Now that doesn't mean I think we are about to start the coming crash if that happens.  I don't think the top is in yet but I just want to put it out there that if we see the 4220 area I think we'll get a pullback from that level. It could be as much as 100 points? But it's likely going to be another buy the dip move, which will push out the top again... like into mid-May or possibly into June?

However, if this doesn't happen and instead we get tiny pullback, like to say 4180-4200, then I'd look for another 100+ points on the upside into early next week. Give me 4300-4400 very quickly and then I'll feel more comfortable that it's the blow off top and high in the market.

Speed of the move up is important, so a grind up to those area over 2-3 weeks isn't a blow off. I need to see it happen in about a week, and with volume so I know stops are getting hit, therefore taking out the bears. Anyway, that's my thoughts for now.  Have a blessed day.

Alert The "Vaccine" Is a Bioweapon - 5 Doctors Testify.

You can get sick from being around people who took the vaccine.  They should be quarantined.