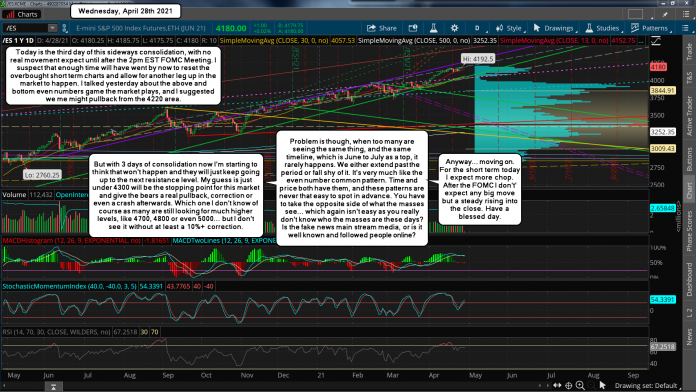 Today is the third day of this sideways consolidation, with no real movement expect until after the 2pm EST FOMC Meeting. I suspect that enough time will have went by now to reset the overbought short term charts and allow for another leg up in the market to happen. I talked yesterday about the above and bottom even numbers game the market plays, and I suggested we me might pullback from the 4220 area.

But with 3 days of consolidation now I'm starting to think that won't happen and they will just keep going up to the next resistance level. My guess is just under 4300 will be the stopping point for this market and give the bears a real pullback, correction or even a crash afterwards. Which one I don't know of course as many are still looking for much higher levels, like 4700, 4800 or even 5000... but I don't see it without at least a 10%+ correction.

Problem is though, when too many are seeing the same thing, and the same timeline, which is June to July as a top, it rarely happens. We either extend past the period or fall shy of it. It's very much like the even number common pattern. Time and price both have them, and these patterns are never that easy to spot in advance. You have to take the opposite side of what the masses see... which again isn't easy as you really don't know who the masses are these days? Is the fake news main stream media, or is it well known and followed people online?

Anyway... moving on. For the short term today I expect more chop. After the FOMC I don't' expect any big move but a steady rising into the close. Have a blessed day.