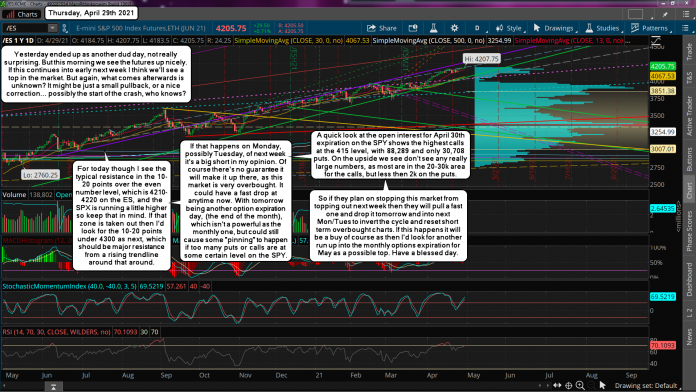 Yesterday ended up as another dud day, not really surprising. But this morning we see the futures up nicely. If this continues into early next week I think we'll see a top in the market. But again, what comes afterwards is unknown? It might be just a small pullback, or a nice correction... possibly the start of the crash, who knows?

For today though I see the typical resistance in the 10-20 points over the even number level, which is 4210-4220 on the ES, and the SPX is running a little higher so keep that in mind. If that zone is taken out then I'd look for the 10-20 points under 4300 as next, which should be major resistance from a rising trendline around that around.

If that happens on Monday, possibly Tuesday, of next week it's a big short in my opinion. Of course there's no guarantee it will make it up there, as this market is very overbought. It could have a fast drop at anytime now. With tomorrow being another option expiration day, (the end of the month), which isn't a powerful as the monthly one, but could still cause some "pinning" to happen if too many puts or calls are at some certain level on the SPY.

So if they plan on stopping this market from topping out next week then they will pull a fast one and drop it tomorrow and into next Mon/Tues to invert the cycle and reset short term overbought charts. If this happens it will be a buy of course as then I'd look for another run up into the monthly options expiration for May as a possible top. Have a blessed day.