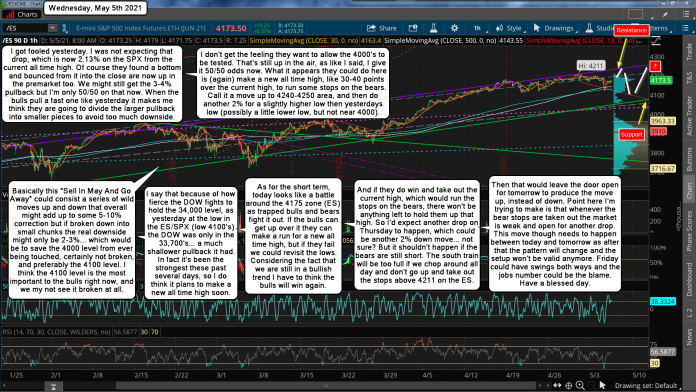 I got fooled yesterday. I was not expecting that drop, which is now 2.13% on the SPX from the current all time high. Of course they found a bottom and bounced from it into the close are now up in the premarket too. We might still get the 3-4% pullback but I'm only 50/50 on that now. When the bulls pull a fast one like yesterday it makes me think they are going to divide the larger pullback into smaller pieces to avoid too much downside.

Basically this "Sell In May And Go Away" could consist a series of wild moves up and down that overall might add up to some 5-10% correction but if broken down into small chunks the real downside might only be 2-3%... which would be to save the 4000 level from ever being touched, certainly not broken, and preferably the 4100 level. I think the 4100 level is the most important to the bulls right now, and we my not see it broken at all.

I say that because of how fierce the DOW fights to hold the 34,000 level, as yesterday at the low in the ES/SPX (low 4100's) the DOW was only in the 33,700's... a much shallower pullback it had. In fact it's been the strongest these past several days, so I do think it plans to make a new all time high soon.

As for the short term, today looks like a battle around the 4175 zone (ES) as trapped bulls and bears fight it out. If the bulls can get up over it they can make a run for a new all time high, but if they fail we could revisit the lows. Considering the fact that we are still in a bullish trend I have to think the bulls will win again.

And if they do win and take out the current high, which would run the stops on the bears, there won't be anything left to hold them up that high. So I'd expect another drop on Thursday to happen, which could be another 2% down move... not sure? But it shouldn't happen if the bears are still short. The south train will be too full if we chop around all day and don't go up and take out the stops above 4211 on the ES.

Then that would leave the door open for tomorrow to produce the move up, instead of down. Point here I'm trying to make is that whenever the bear stops are taken out the market is weak and open for another drop. This move though needs to happen between today and tomorrow as after that the pattern will change and the setup won't be valid anymore. Friday could have swings both ways and the jobs number could be the blame. Have a blessed day.