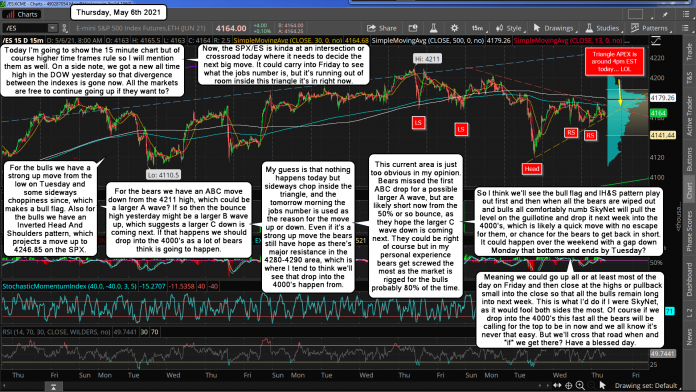 Today I'm going to show the 15 minute chart but of course higher time frames rule so I will mention them as well. On a side note, we got a new all time high in the DOW yesterday so that divergence between the indexes is gone now. All the markets are free to continue going up if they want to?

Now, the SPX/ES is kinda at an intersection or crossroad today where it needs to decide the next big move. It could carry into Friday to see what the jobs number is, but it's running out of room inside this triangle it's in right now.

For the bears we have an ABC move down from the 4211 high, which could be a larger A wave? If so then the bounce high yesterday might be a larger B wave up, which suggests a larger C down is coming next. If that happens we should drop into the 4000's as a lot of bears think is going to happen.

My guess is that nothing happens today but sideways chop inside the triangle, and the tomorrow morning the jobs number is used as the reason for the move up or down. Even if it's a strong up move the bears still have hope as there's major resistance in the 4280-4290 area, which is where I tend to think we'll see that drop into the 4000's happen from.

This current area is just too obvious in my opinion. Bears missed the first ABC drop for a possible larger A wave, but are likely short now from the 50% or so bounce, as they hope the larger C wave down is coming next. They could be right of course but in my personal experience bears get screwed the most as the market is rigged for the bulls probably 80% of the time.

So I think we'll see the bull flag and IH&S pattern play out first and then when all the bears are wiped out and bulls all comfortably numb SkyNet will pull the level on the guillotine and drop it next week into the 4000's, which is likely a quick move with no escape for them, or chance for the bears to get back in short. It could happen over the weekend with a gap down Monday that bottoms and ends by Tuesday?

Meaning we could go up all or at least most of the day on Friday and then close at the highs or pullback small into the close so that all the bulls remain long into next week. This is what I'd do if I were SkyNet, as it would fool both sides the most. Of course if we drop into the 4000's this fast all the bears will be calling for the top to be in now and we all know it's never that easy. But we'll cross that road when and "if" we get there? Have a blessed day.