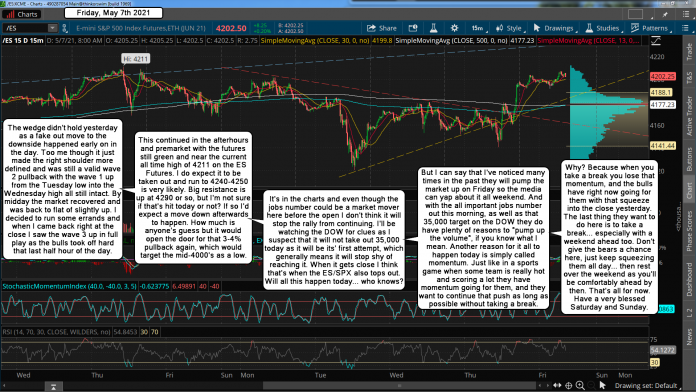 The wedge didn't hold yesterday as a fake out move to the downside happened early on in the day. Too me though it just made the right shoulder more defined and was still a valid wave 2 pullback with the wave 1 up from the Tuesday low into the Wednesday high all still intact. By midday the market recovered and was back to flat of slightly up. I decided to run some errands and when I came back right at the close I saw the wave 3 up in full play as the bulls took off hard that last half hour of the day.

This continued in the afterhours and premarket with the futures still green and near the current all time high of 4211 on the ES Futures. I do expect it to be taken out and run to 4240-4250 is very likely. Big resistance is up at 4290 or so, but I'm not sure if that's hit today or not? If so I'd expect a move down afterwards to happen. How much is anyone's guess but it would open the door for that 3-4% pullback again, which would target the mid-4000's as a low.

It's in the charts and even though the jobs number could be a market mover here before the open I don't think it will stop the rally from continuing. I'll be watching the DOW for clues as I suspect that it will not take out 35,000 today as it will be its' first attempt, which generally means it will stop shy of reaching it. When it gets close I think that's when the ES/SPX also tops out. Will all this happen today... who knows?

But I can say that I've noticed many times in the past they will pump the market up on Friday so the media can yap about it all weekend. And with the all important jobs number out this morning, as well as that 35,000 target on the DOW they do have plenty of reasons to "pump up the volume", if you know what I mean. Another reason for it all to happen today is simply called momentum. Just like in a sports game when some team is really hot and scoring a lot they have momentum going for them, and they want to continue that push as long as possible without taking a break.

Why? Because when you take a break you lose that momentum, and the bulls have right now going for them with that squeeze into the close yesterday. The last thing they want to do here is to take a break... especially with a weekend ahead too. Don't give the bears a chance here, just keep squeezing them all day... then rest over the weekend as you'll be comfortably ahead by then. That's all for now. Have a very blessed Saturday and Sunday.