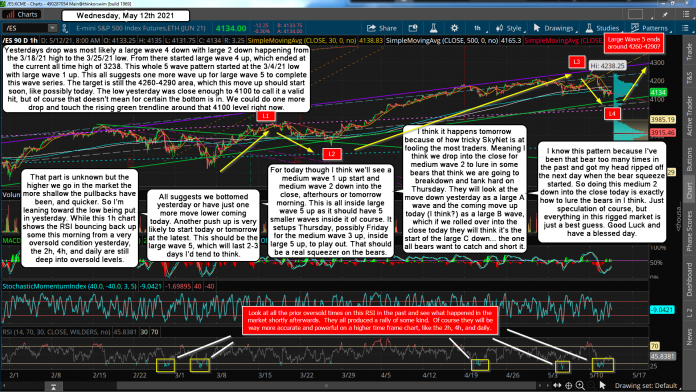 Yesterdays drop was most likely a large wave 4 down with large 2 down happening from the 3/18/21 high to the 3/25/21 low. From there started large wave 4 up, which ended at the current all time high of 3238. This whole 5 wave pattern started at the 3/4/21 low with large wave 1 up. This all suggests one more wave up for large wave 5 to complete this wave series. The target is still the 4260-4290 area, which this move up should start soon, like possibly today. The low yesterday was close enough to 4100 to call it a valid hit, but of course that doesn't mean for certain the bottom is in. We could do one more drop and touch the rising green trendline around that 4100 level right now.

That part is unknown but the higher we go in the market the more shallow the pullbacks have been, and quicker. So I'm leaning toward the low being put in yesterday. While this 1h chart shows the RSI bouncing back up some this morning from a very oversold condition yesterday, the 2h, 4h, and daily are still deep into oversold levels.

All suggests we bottomed yesterday or have just one more move lower coming today. Another push up is very likely to start today or tomorrow at the latest. This should be the large wave 5, which will last 2-3 days I'd tend to think.

For today though I think we'll see a medium wave 1 up start and medium wave 2 down into the close, afterhours or tomorrow morning. This is all inside large wave 5 up as it should have 5 smaller waves inside it of course. It setups Thursday, possibly Friday for the medium wave 3 up, inside large 5 up, to play out. That should be a real squeezer on the bears.

I think it happens tomorrow because of how tricky SkyNet is at fooling the most traders. Meaning I think we drop into the close for medium wave 2 to lure in some bears that think we are going to breakdown and tank hard on Thursday. They will look at the move down yesterday as a large A wave and the coming move up today (I think?) as a large B wave, which if we rolled over into the close today they will think it's the start of the large C down... the one all bears want to catch and short it.

I know this pattern because I've been that bear too many times in the past and got my head ripped off the next day when the bear squeeze started. So doing this medium 2 down into the close today is exactly how to lure the bears in I think. Just speculation of course, but everything in this rigged market is just a best guess. Good Luck and have a blessed day.