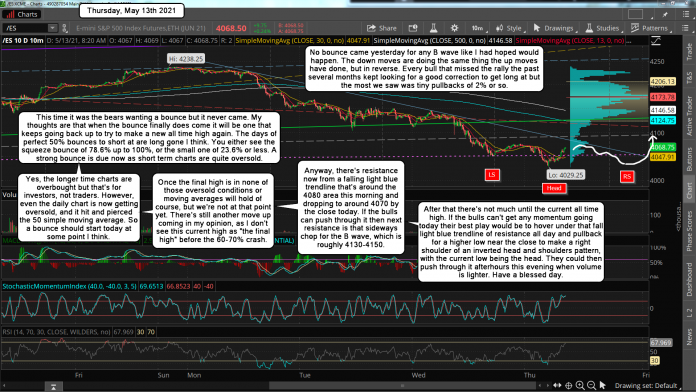 No bounce came yesterday for any B wave like I had hoped would happen. The down moves are doing the same thing the up moves have done, but in reverse. Every bull that missed the rally the past several months kept looking for a good correction to get long at but the most we saw was tiny pullbacks of 2% or so.

This time it was the bears wanting a bounce but it never came. My thoughts are that when the bounce finally does come it will be one that keeps going back up to try to make a new all time high again. The days of perfect 50% bounces to short at are long gone I think. You either see the squeeze bounce of 78.6% up to 100%, or the small one of 23.6% or less. A strong bounce is due now as short term charts are quite oversold.

Yes, the longer time charts are overbought but that's for investors, not traders. However, even the daily chart is now getting oversold, and it hit and pierced the 50 simple moving average. So a bounce should start today at some point I think.

Once the final high is in none of those oversold conditions or moving averages will hold of course, but we're not at that point yet. There's still another move up coming in my opinion, as I don't see this current high as "the final high" before the 60-70% crash.

Anyway, there's resistance now from a falling light blue trendline that's around the 4080 area this morning and dropping to around 4070 by the close today. If the bulls can push through it then next resistance is that sideways chop for the B wave, which is roughly 4130-4150.

After that there's not much until the current all time high. If the bulls can't get any momentum going today their best play would be to hover under that fall light blue trendline of resistance all day and pullback for a higher low near the close to make a right shoulder of an inverted head and shoulders pattern, with the current low being the head. They could then push through it afterhours this evening when volume is lighter. Have a blessed day.