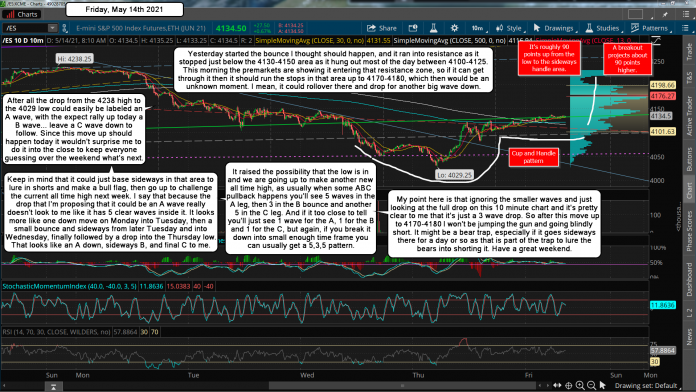 Yesterday started the bounce I thought should happen, and it ran into resistance as it stopped just below the 4130-4150 area as it hung out most of the day between 4100-4125. This morning the premarkets are showing it entering that resistance zone, so if it can get through it then it should run the stops in that area up to 4170-4180, which then would be an unknown moment. I mean, it could rollover there and drop for another big wave down.

After all the drop from the 4238 high to the 4029 low could easily be labeled an A wave, with the expect rally up today a B wave... leave a C wave down to follow. Since this move up should happen today it wouldn't surprise me to do it into the close to keep everyone guessing over the weekend what's next.

Keep in mind that it could just base sideways in that area to lure in shorts and make a bull flag, then go up to challenge the current all time high next week. I say that because the drop that I'm proposing that it could be an A wave really doesn't look to me like it has 5 clear waves inside it. It looks more like one down move on Monday into Tuesday, then a small bounce and sideways from later Tuesday and into Wednesday, finally followed by a drop into the Thursday low. That looks like an A down, sideways B, and final C to me.

It raised the possibility that the low is in and we are going up to make another new all time high, as usually when some ABC pullback happens you'll see 5 waves in the A leg, then 3 in the B bounce and another 5 in the C leg. And if it too close to tell you'll just see 1 wave for the A, 1 for the B and 1 for the C, but again, if you break it down into small enough time frame you can usually get a 5,3,5 pattern.

My point here is that ignoring the smaller waves and just looking at the full drop on this 10 minute chart and it's pretty clear to me that it's just a 3 wave drop. So after this move up to 4170-4180 I won't be jumping the gun and going blindly short. It might be a bear trap, especially if it goes sideways there for a day or so as that is part of the trap to lure the bears into shorting it. Have a great weekend.