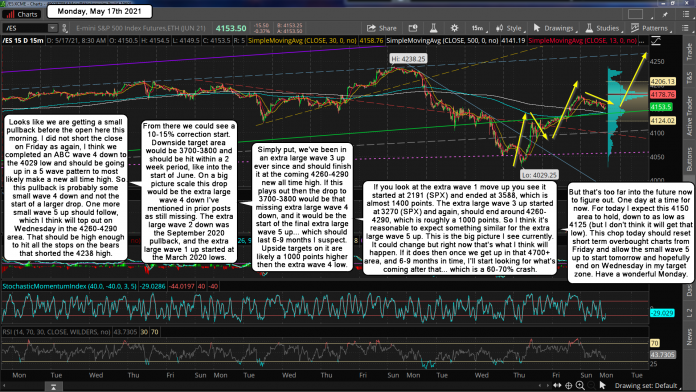 Looks like we are getting a small pullback before the open here this morning. I did not short the close on Friday as again, I think we completed an ABC wave 4 down to the 4029 low and should be going up in a 5 wave pattern to most likely make a new all time high. So this pullback is probably some small wave 4 down and not the start of a larger drop. One more small wave 5 up should follow, which I think will top out on Wednesday in the 4260-4290 area. That should be high enough to hit all the stops on the bears that shorted the 4238 high.

From there we could see a 10-15% correction start. Downside target area would be 3700-3800 and should be hit within a 2 week period, like into the start of June. On a big picture scale this drop would be the extra large wave 4 down I've mentioned in prior posts as still missing. The extra large wave 2 down was the September 2020 pullback, and the extra large wave 1 up started at the March 2020 lows.

Simply put, we've been in an extra large wave 3 up ever since and should finish it at the coming 4260-4290 new all time high. If this plays out then the drop to 3700-3800 would be that missing extra large wave 4 down, and it would be the start of the final extra large wave 5 up... which should last 6-9 months I suspect. Upside targets on it are likely a 1000 points higher then the extra wave 4 low.

But that's too far into the future now to figure out. One day at a time for now. For today I expect this 4150 area to hold, down to as low as 4125 (but I don't think it will get that low). This chop today should reset short term overbought charts from Friday and allow the small wave 5 up to start tomorrow and hopefully end on Wednesday in my target zone. Have a wonderful Monday.