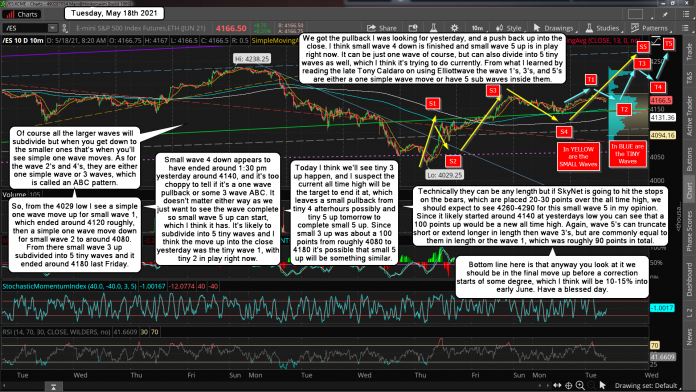 We got the pullback I was looking for yesterday, and a push back up into the close. I think small wave 4 down is finished and small wave 5 up is in play right now. It can be just one wave of course, but can also divide into 5 tiny waves as well, which I think it's trying to do currently. From what I learned by reading the late Tony Caldaro on using Elliottwave the wave 1's, 3's, and 5's are either a one simple wave move or have 5 sub waves inside them.

Of course all the larger waves will subdivide but when you get down to the smaller ones that's when you'll see simple one wave moves. As for the wave 2's and 4's, they are either one simple wave or 3 waves, which is called an ABC pattern.

Small wave 4 down appears to have ended around 1:30 pm yesterday around 4140, and it's too choppy to tell if it's a one wave pullback or some 3 wave ABC. It doesn't matter either way as we just want to see the wave complete so small wave 5 up can start, which I think it has. It's likely to subdivide into 5 tiny waves and I think the move up into the close yesterday was the tiny wave 1, with tiny 2 in play right now.

Today I think we'll see tiny 3 up happen, and I suspect the current all time high will be the target to end it at, which leaves a small pullback from tiny 4 afterhours possibly and tiny 5 up tomorrow to complete small 5 up. Since small 3 up was about a 100 points from roughly 4080 to 4180 it's possible that small 5 up will be something similar.

Technically they can be any length but if SkyNet is going to hit the stops on the bears, which are placed 20-30 points over the all time high, we should expect to see 4260-4290 for this small wave 5 in my opinion. Since it likely started around 4140 at yesterdays low you can see that a 100 points up would be a new all time high. Again, wave 5's can truncate short or extend longer in length then wave 3's, but are commonly equal to them in length or the wave 1, which was roughly 90 points in total.

Bottom line here is that anyway you look at it we should be in the final move up before a correction starts of some degree, which I think will be 10-15% into early June. Have a blessed day.