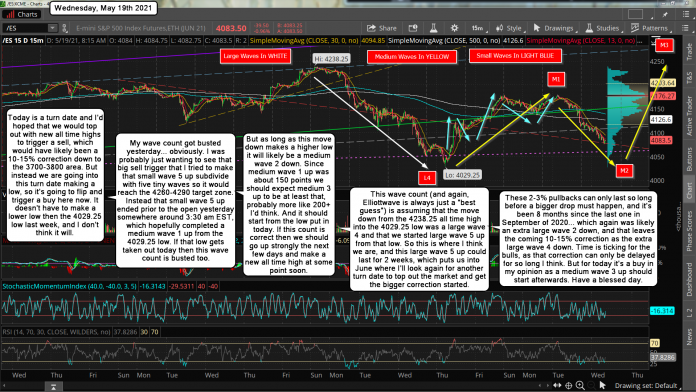 Today is a turn date and I'd hoped that we would top out with new all time highs to trigger a sell, which would have likely been a 10-15% correction down to the 3700-3800 area. But instead we are going into this turn date making a low, so it's going to flip and trigger a buy here now. It doesn't have to make a lower low then the 4029.25 low last week, and I don't think it will.

My wave count got busted yesterday... obviously. I was probably just wanting to see that big sell trigger that I tried to make that small wave 5 up subdivide with five tiny waves so it would reach the 4260-4290 target zone. Instead that small wave 5 up ended prior to the open yesterday somewhere around 3:30 am EST, which hopefully completed a medium wave 1 up from the 4029.25 low. If that low gets taken out today then this wave count is busted too.

But as long as this move down makes a higher low it will likely be a medium wave 2 down. Since medium wave 1 up was about 150 points we should expect medium 3 up to be at least that, probably more like 200+ I'd think. And it should start from the low put in today. If this count is correct then we should go up strongly the next few days and make a new all time high at some point soon.

This wave count (and again, Elliottwave is always just a "best guess") is assuming that the move down from the 4238.25 all time high into the 4029.25 low was a large wave 4 and that we started large wave 5 up from that low. So this is where I think we are, and this large wave 5 up could last for 2 weeks, which puts us into June where I'll look again for another turn date to top out the market and get the bigger correction started.

These 2-3% pullbacks can only last so long before a bigger drop must happen, and it's been 8 months since the last one in September of 2020... which again was likely an extra large wave 2 down, and that leaves the coming 10-15% correction as the extra large wave 4 down. Time is ticking for the bulls, as that correction can only be delayed for so long I think. But for today it's a buy in my opinion as a medium wave 3 up should start afterwards. Have a blessed day.