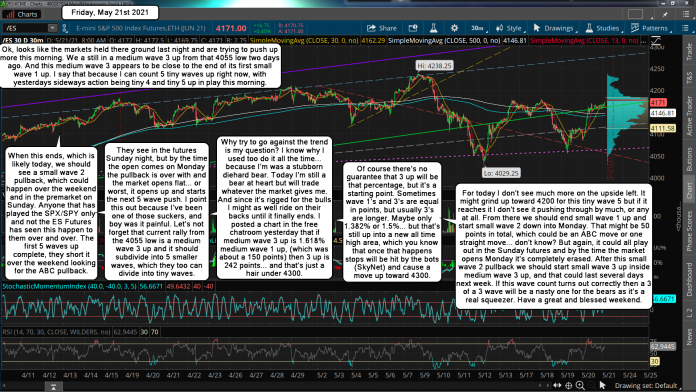 Ok, looks like the markets held there ground last night and are trying to push up more this morning. We a still in a medium wave 3 up from that 4055 low two days ago. And this medium wave 3 appears to be close to the end of its first small wave 1 up. I say that because I can count 5 tiny waves up right now, with yesterdays sideways action being tiny 4 and tiny 5 up in play this morning.

When this ends, which is likely today, we should see a small wave 2 pullback, which could happen over the weekend and in the premarket on Sunday. Anyone that has played the SPX/SPY only and not the ES Futures has seen this happen to them over and over. The first 5 waves up complete, they short it over the weekend looking for the ABC pullback.

They see in the futures Sunday night, but by the time the open comes on Monday the pullback is over with and the market opens flat... or worst, it opens up and starts the next 5 wave push. I point this out because I've been one of those suckers, and boy was it painful. Let's not forget that current rally from the 4055 low is a medium wave 3 up and it should subdivide into 5 smaller waves, which they too can divide into tiny waves.

Why try to go against the trend is my question? I know why I used too do it all the time... because I'm was a stubborn diehard bear. Today I'm still a bear at heart but will trade whatever the market gives me. And since it's rigged for the bulls I might as well ride on their backs until it finally ends. I posted a chart in the free chatroom yesterday that if medium wave 3 up is 1.618% medium wave 1 up, (which was about a 150 points) then 3 up is 242 points... and that's just a hair under 4300.

Of course there's no guarantee that 3 up will be that percentage, but it's a starting point. Sometimes wave 1's and 3's are equal in points, but usually 3's are longer. Maybe only 1.382% or 1.5%... but that's still up into a new all time high area, which you know that once that happens stops will be hit by the bots (SkyNet) and cause a move up toward 4300.

For today I don't see much more on the upside left. It might grind up toward 4200 for this tiny wave 5 but if it reaches it I don't see it pushing through by much, or any at all. From there we should end small wave 1 up and start small wave 2 down into Monday. That might be 50 points in total, which could be an ABC move or one straight move... don't know? But again, it could all play out in the Sunday futures and by the time the market opens Monday it's completely erased. After this small wave 2 pullback we should start small wave 3 up inside medium wave 3 up, and that could last several days next week. If this wave count turns out correctly then a 3 of a 3 wave will be a nasty one for the bears as it's a real squeezer. Have a great and blessed weekend.