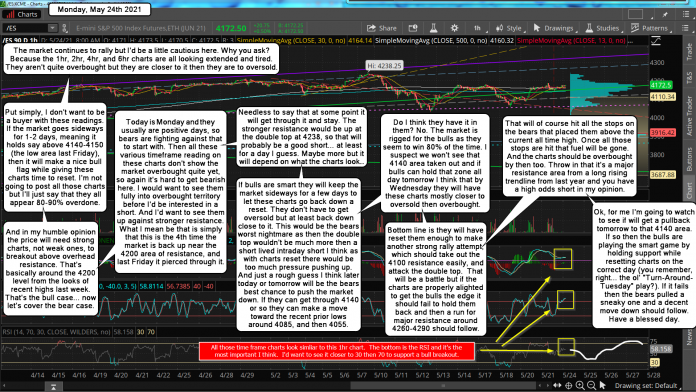 The market continues to rally but I'd be a little cautious here. Why you ask? Because the 1hr, 2hr, 4hr, and 6hr charts are all looking extended and tired. They aren't quite overbought but they are closer to it then they are to oversold.

Put simply, I don't want to be a buyer with these readings. If the market goes sideways for 1-2 days, meaning it holds say above 4140-4150 (the low area last Friday), then it will make a nice bull flag while giving these charts time to reset. I'm not going to post all those charts but I'll just say that they all appear 80-90% overdone.

And in my humble opinion the price will need strong charts, not weak ones, to breakout above overhead resistance. That's basically around the 4200 level from the looks of recent highs last week. That's the bull case... now let's cover the bear case.

Today is Monday and they usually are positive days, so bears are fighting against that to start with. Then all these various timeframe reading on these charts don't show the market overbought quite yet, so again it's hard to get bearish here. I would want to see them fully into overbought territory before I'd be interested in a short. And I'd want to see them up against stronger resistance. What I mean be that is simply that this is the 4th time the market is back up near the 4200 area of resistance, and last Friday it pierced through it.

Needless to say that at some point it will get through it and stay. The stronger resistance would be up at the double top at 4238, so that will probably be a good short... at least for a day I guess. Maybe more but it will depend on what the charts look like at that time.

If bulls are smart they will keep the market sideways for a few days to let these charts go back down a reset. They don't have to get oversold but at least back down close to it. This would be the bears worst nightmare as then the double top wouldn't be much more then a short lived intraday short I think as with charts reset there would be too much pressure pushing up. And just a rough guess I think later today or tomorrow will be the bears best chance to push the market down. If they can get through 4140 or so they can make a move toward the recent prior lows around 4085, and then 4055.

Do I think they have it in them? No. The market is rigged for the bulls as they seem to win 80% of the time. I suspect we won't see that 4140 area taken out and if bulls can hold that zone all day tomorrow I think that by Wednesday they will have these charts mostly closer to oversold then overbought.

Bottom line is they will have reset them enough to make another strong rally attempt, which should take out the 4100 resistance easily, and attack the double top.  That will be a battle but if the charts are properly alighted to get the bulls the edge it should fail to hold them back and then a run for major resistance around 4260-4290 should follow.

That will of course hit all the stops on the bears that placed them above the current all time high. Once all those stops are hit that fuel will be gone. And the charts should be overbought by then too. Throw in that it's a major resistance area from a long rising trendline from last year and you have a high odds short in my opinion.

Ok, for me I'm going to watch to see if will get a pullback tomorrow to that 4140 area. If so then the bulls are playing the smart game by holding support while resetting charts on the correct day (you remember, right... the ol' "Turn-Around-Tuesday" play?). If it fails then the bears pulled a sneaky one and a decent move down should follow. Have a blessed day.