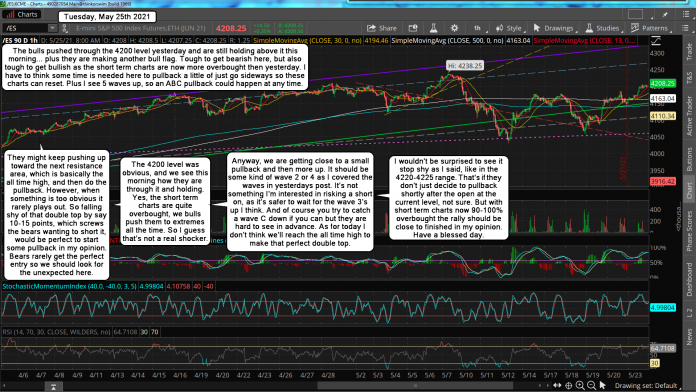 The bulls pushed through the 4200 level yesterday and are still holding above it this morning... plus they are making another bull flag. Tough to get bearish here, but also tough to get bullish as the short term charts are now more overbought then yesterday. I have to think some time is needed here to pullback a little of just go sideways so these charts can reset. Plus I see 5 waves up, so an ABC pullback could happen at any time.

They might keep pushing up toward the next resistance area, which is basically the all time high, and then do the pullback. However, when something is too obvious it rarely plays out. So falling shy of that double top by say 10-15 points, which screws the bears wanting to short it, would be perfect to start some pullback in my opinion. Bears rarely get the perfect entry so we should look for the unexpected here.

The 4200 level was obvious, and we see this morning how they are through it and holding. Yes, the short term charts are quite overbought, we bulls push them to extremes all the time. So I guess that's not a real shocker.

Anyway, we are getting close to a small pullback and then more up. It should be some kind of wave 2 or 4 as I covered the waves in yesterdays post. It's not something I'm interested in risking a short on, as it's safer to wait for the wave 3's up I think. And of course you try to catch a wave C down if you can but they are hard to see in advance. As for today I don't think we'll reach the all time high to make that perfect double top.

I wouldn't be surprised to see it stop shy as I said, like in the 4220-4225 range. That's if they don't just decide to pullback shortly after the open at the current level, not sure. But with short term charts now 90-100% overbought the rally should be close to finished in my opinion. Have a blessed day.