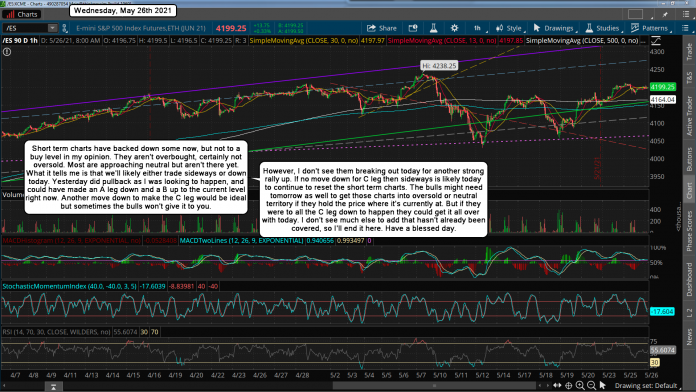 Short term charts have backed down some now, but not to a buy level in my opinion. They aren't overbought, certainly not oversold. Most are approaching neutral but aren't there yet. What it tells me is that we'll likely either trade sideways or down today. Yesterday did pullback as I was looking to happen, and could have made an A leg down and a B up to the current level right now. Another move down to make the C leg would be ideal but sometimes the bulls won't give it to you.

However, I don't see them breaking out today for another strong rally up. If no move down for C leg then sideways is likely today to continue to reset the short term charts. The bulls might need tomorrow as well to get those charts into oversold or neutral territory if they hold the price where it's currently at. But if they were to all the C leg down to happen they could get it all over with today. I don't see much else to add that hasn't already been covered, so I'll end it here. Have a blessed day.