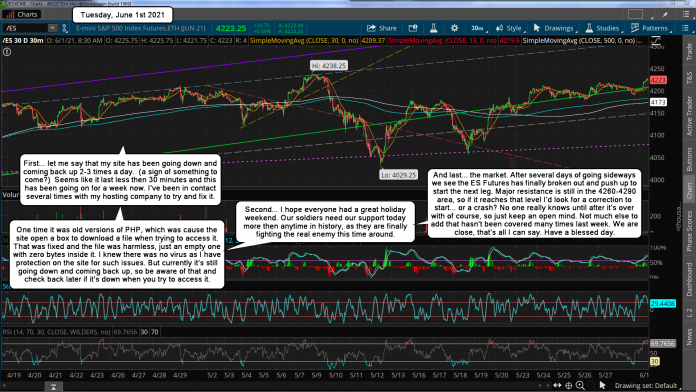 First... let me say that my site has been going down and coming back up 2-3 times a day.  (a sign of something to come?)  Seems like it last less then 30 minutes and this has been going on for a week now. I've been in contact several times with my hosting company to try and fix it.

One time it was old versions of PHP, which was cause the site open a box to download a file when trying to access it. That was fixed and the file was harmless, just an empty one with zero bytes inside it. I knew there was no virus as I have protection on the site for such issues. But currently it's still going down and coming back up, so be aware of that and check back later if it's down when you try to access it.

Second... I hope everyone had a great holiday weekend. Our soldiers need our support today more then anytime in history, as they are finally fighting the real enemy this time around.

And last... the market. After several days of going sideways we see the ES Futures has finally broken out and push up to start the next leg. Major resistance is still in the 4260-4290 area, so if it reaches that level I'd look for a correction to start... or a crash? No one really knows until after it's over with of course, so just keep an open mind. Not much else to add that hasn't been covered many times last week. We are close, that's all I can say. Have a blessed day.